Just prior to Christmas, Highland Park - the single malt from the Orkney islands - added two further limited edition Vintages to their esteemed range of premium whiskies. The first was distilled in 1971 and the second was distilled in 1976. The pair will be appearing in specialist whisky retailers shortly and join three other whiskies that are currently available in the Highland Park Orcadian Vintage range - the 1964, 1968 & 1970. All are bottled in the same bespoke black glass bottles, which feature an embossed amulet of the Highland Park logo and are presented in a wooden casket.

Highland Park is the most northern whisky distillery in Scotland. In fact, it is one of the most northern distilleries of any kind in the world, beating others in Canada and Russia. As mentioned, Highland Park is located on the Orkney islands, which lie just off the north coast of the Scottish mainland.  It is found close to the capital of Kirkwall and is one of only two distilleries on the main island (Scapa being the other). Highland Park has one of the best selling and most highly awarded single malt whisky ranges in the world. It is currently owned by the Edrington Group and has an annual production capacity of 2.5 million litres.

Highland Park is one of the oldest whisky distilleries in Scotland and was established in 1798 by the legendary Magnus Eunson. He was known as the 'whisky priest' - he was a priest by day and an illegal whisky distiller by night! The story goes that he used to store the whisky in the crypt under Kirkwall cathedral so that it would be safe from the nosy Customs & Excise men!

Here, we will be sampling and reviewing the two new releases, along with the 1970 Vintage, which we were delighted to also get the opportunity to taste at a recent event. Let's kick off with that ...

Our tasting notes - 1970
Strength - 48% ABV/ Casks - mix of ex-bourbon & ex-sherry/ Bottles - 1,800/ Price - £2,300
The colour is a dark golden amber and the nose is rich, complex and enticing. There is so much going on here that it is difficult to pin down specific aromas.  There are prominent aromas of butterscotch and dark dried fruits, plus some exotic fruits such as peach and apricot. The fruit jumps out, but other aromas include muscovado sugar, honey, vanilla and stewed apple, plus background tobacco smoke and baking spice. On the palate, this hits the spot - its warm, soft and very rich.  A creamy coffee notes hits first, then comes a delicious barrage of the dried and stewed fruits from the nose.  Then come notes of peach, oak spice and soft, delicate peat which add further depth. The finish is wonderfully sweet and long with a lovely balance of oak spice and distant earthy peat smoke. A magnificent whisky.

Our tasting notes - 1971
Strength - 46.9% ABV/ Casks - ex-sherry Spanish oak/ Bottles - 657/ Price - £2,300
The colour is a bright golden amber and the nose is fragrant but with a surprising delicacy. There are plenty of burnt brown sugar, toasted nuts, earthy peat smoke and waxy furniture polish aromas and these mix beautifully. Underneath are hints of baking spice (cinnamon, nutmeg, all-spice), some dried fruit (especially citrus peel) and a leafy, herbal note.  On the palate, this is rich and powerful but velvety with a number of delicious, mouth watering notes combining expertly - crumbly brown sugar, drying and soft earthy peat, roasted/toasted nuts plus hints of dried tropical fruits, coffee beans, cocoa powder and baking spice.  The leafy, herbal note is also there again and is reminiscent of dried tobacco.  The initially sweet finish lingers for ages and becomes drier towards the end, with the smokiness outlasting everything. 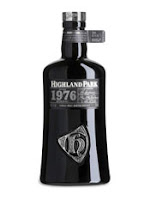 Our tasting notes - 1976
Strength - 49.1% ABV/ Casks - ex-bourbon American oak/ Bottles - 893/ Price - £2,000
The colour is a golden honey yellow and the nose is vibrant, fresh and promising.  There is prominent initial peat smoke and the earthy aromas fade to reveal some vanilla, honey, dried grass and sweet butterscotch and zesty lemon. The dried grass herbal notes carry on through to the palate.  There is plenty going on and the smokiness is again prominent and earthy. Other notes include oatcakes, honey, vanilla, coconut and cocoa powder. It feels creamy with a slight minerality and switches from sweet to savoury very well.  Some tangy lemon zest again adds even further depth. The finish is long and drying with the peat smoke fading after significant time.

What's the verdict?
These are an excellent selection of whiskies. We don't often get to sample such expensive single malts and the few sips that we had of these were a privilege.  Which one is our favourite?  That is difficult to answer - it would be like if we had three children and asking which of those are your favourites.  You love them all but each for a different character and reason. The only problem is that the price puts them out of most people's reach, including ours.  Commonly, people think that older whiskies are better - this is not always true but in this case, Highland Park have hit the mark and given us three exceptional whiskies.
posted by Whisky For Everyone at 6:45 PM