Inbox returns following a brief festive break with the first edition of 2012. Both of us would firstly like to wish everyone a slightly belated Happy New Year. For those of you who may have discovered us recently ... welcome to Whisky For Everyone.

Inbox is our weekly round up of whisky news and PR type material that has recently found its way in to our email inbox. It was created as we cannot write full articles or do justice to every piece that we receive. It features items from around the world of whisky and is published by us each Friday. Within Inbox we write a few lines detailing each press release/piece of news/PR event that we have received and provide links, where possible, for you to find out further information.

The Christmas and New Year period is traditionally a quiet time in terms of marketing and PR.  However, things will soon start to warm up again. A few articles of interest have landed in the last couple of weeks, so here goes ...

Balblair - Oldest Vintage get a revamp
The Balblair distillery in the north Highlands have revealed stylish new packaging for their prestigious Vintage - the 1965.  This is the oldest Vintage in their current range and has been re-launched in a deluxe gift box made from black satin wood and lined with cream leather.  It also features a draw which contains a certificate of authenticity signed by Distillery Manager John MacDonald and a booklet containing tasting notes. The whisky has been taken from a single ex-bourbon cask and this has yielded just 350 bottles.  It has an strength of 52.3% ABV and is available now from high-end specialist retailers at a cost of £1,200 each.

Benriach - New Solstice released
The award winning independent Speyside distillery of Benriach have bottled a second version of their popular Solstice single malt.  It was released on 21 December - the day of the Winter Solstice in the Northern Hemisphere.  The first bottling was released on the same day in 2010 and was highly regarded with Jim Murray describing it in the latest version of his Whisky Bible as 'spellbinding'.  This release, like the first edition, is heavily peated and has been matured in ex-bourbon casks, before finishing in ex-tawny Port casks.  It is older at 17 years of age and has a strength of 50% ABV. Sales Director for Benriach, Alistair Walker said: “Our new malt is a superb marriage of peat and fruit, a worthy successor to our 15 year old Solstice ... and just as spellbinding".

Benriach - 10,000 casks and counting
More news from Benriach, this time in the form of a milestone.  Just before Christmas, the independently owned distillery filled its 10,000th cask with new make spirit since the new ownership re-started Benriach in 2004. The cask in question was a second fill ex-Pedro Ximenez sherry puncheon, which holds approximately 500 litres. Benriach's Distillery Manager and friend of Whisky For Everyone, Stuart Buchanan (pictured in the slightly fuzzy photo to the left) commented, "There is no doubt in terms of blood, sweat and tears, this has been the busiest year we have had at the distillery since it became independent. As we entered December, we had a wee suspicion that we might hit the magic 10,000 cask number and we eventually filled cask it on Wednesday December 14th.”

Glenmorangie - Artein hits the market
The famous Highland distillery has announced the third release in its Private Editions range. Named Artein, which is the Gaelic word for stone, the new single malt joins the popular Sonnalta and Finealta in the range. The name refers to the influence the local limestone has on the water used in Glenmorangie's whisky production. Glenmorangie Artein is crafted from American white oak ex-bourbon casks of 15 year old and 21 year old whiskies (in the ratio of 2:1), which were hand selected by Head of Distilling & Whisky Creation Dr. Bill Lumsden. These subsequently underwent an extra maturation period in Super Tuscan Sassacaia wine casks.  Artein has been bottled at 46% ABV and will retail at £70 a bottle.

Mackmyra - Open new distillery
Just before Christmas, the Swedish distillery in the town of Gävle has opened its new distillery.  The move was driven by the ever growing popularity of Mackmyra's single malt whiskies, which continues to win plaudits around the world.  The facility, known as the Mackmyra Whisky Village, was designed by architect Thomas Eriksson and features a set of underground maturation warehouses. It also features an innovative system that uses gravity to aid whisky production, with the milling and mashing processes starting things off at the top of its 37 storey high building.  The MWV has an annual capacity of 1.2 million litres, which quadruples the output of the original distillery built in 1999. Full production and visitor tours will commence in the Spring.  In the meantime, check out the short video below which shows the opening event on 17 December 2011. You will have to brush up on your Swedish though ... 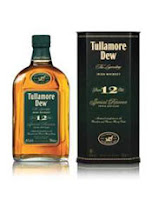 Tullamore Dew - UK release for Special Reserve
The popular Irish whiskey brand has released its award winning 12 year old Special Reserve expression on to the UK market. New owners William Grant & Sons have seen this expression sell exceptionally well in the USA. It is a unique blend of three different types of triple distilled Irish whiskey - Irish pot still, malt and grain - all of which have been aged between 12 and 15 years. The whiskey has been matured in a combination of ex-bourbon and ex-sherry casks to create a blend of great depth and complexity.  The whiskey is available now in good supermarkets and specialist retailers with prices starting at around £30.
posted by Whisky For Everyone at 7:11 AM