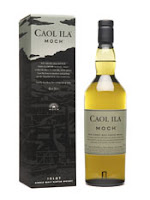 Caol Ila is a distillery on the famous whisky island of Islay. It is the largest distillery on the island with an annual production capacity of 3.5 million litres but despite this, is one of the least known. The main reason is that the majority of the stock goes to the Johnnie Walker blended whisky range, which is produced by the current owners, Diageo. However, this is changing as they begin to increase the promotion of Caol Ila as a single malt and release more bottlings.

Caol Ila (pronounced cull-ee-la) was founded in 1846 by Hector Henderson, who had formerly owned the Littlemill distillery near Glasgow. It is located on the northeast coast of the island and means ‘Sound of Islay’ in Gaelic. This is the name of the narrow stretch of water that separates Islay from the neighbouring island of Jura and the distillery overlooks this. It has a remote location and is surrounded by cliffs and caves on three sides. This difficult site was selected for its proximity to an abundant water supply from the nearby Loch Nam Bam and the good access to local shipping routes.

The Moch is a limited edition single malt whisky that was released in Spring 2011 to compliment the core range of Caol Ila.  Originally it was bottled for members of the Friends of the Classic Malts but then received a small general release to specialist whisky retailers. The word 'moch' translates as 'dawn' from Gaelic and the whisky is so named as it represents a slight departure for the distillery. The Moch is the first Caol Ila whisky to be bottled by taste rather than age statement, strength or cask finish.  It is bottled at 43% ABV and should cost around £35-40.

Our tasting notes
The colour is a very pale lemon yellow and the nose is vibrant and expressive.  There are immediate notes of malted cereals, fresh damp peat and green apple.  These are quickly joined by other aromas that add some complexity - think of dried grass (or hay), vanilla, hot tar and a highly distinctive hit of zesty lemon.  The slightly aggressive, feisty nature softens with time in the glass.

On the palate, this feels creamy and is initially very sweet.  This sweetness is driven by two distinct notes - icing sugar and honey.  It is not long before the smokiness arrives.  This almost catches the taste buds by surprise following the sweet start but when the smoke hits, it stays for the duration.  It has a peppery, chili-like heat and spiciness to it, which is a classic note in young, smoky whiskies.  The smoke softens with time in the mouth and becomes a little less spicy and softer with more of a bonfire-like quality.  There is maybe a hint of the tar from the nose also. There are also notes of burnt biscuit, malty cereals, vanilla, in addition to that zingy lemon zest from the nose.  It is an interesting mix of sweet and savoury.

The finish is long and the smokiness takes an age to fade (we are talking about a good 15 minutes here).  The finish is the palate in reverse - the drying spices and tangy zest give way to the intensely sweet notes, with the smoke smouldering away in the background.

What's the verdict?
The Moch is a very interesting whisky. It is feisty, intense and pitches lots of sweet notes against lots of savoury notes. It also seems stronger on the palate than its 43% ABV. However, it somehow manages to marry all of these elements together very successfully and the final result is a very enjoyable whisky indeed. Anyone who like their smoky whiskies should definitely try or buy this.
posted by Matt C at 7:46 PM