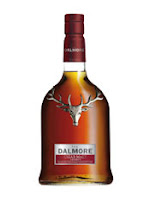 The Highland distillery of Dalmore has released a revised version of a classic whisky from their collection. The previous incarnation of the Cigar Malt was retired in 2007. This new version is named the Cigar Malt Reserve and is back by popular demand.  It is aimed at whisky connoisseurs and cigar aficionados alike and has been created primarily to be paired with cigars, particularly the more robust styles such as Partagas. Naturally, the whisky can also be enjoyed minus the cigar if you don't smoke.

The Cigar Malt Reserve has been created by Dalmore's Master Blender Richard Paterson and has been matured in a combination of three different casks to create a rich flavour profile - these are ex-Oloroso sherry, ex-American oak bourbon and ex-Cabernet Sauvignon red wine casks. Although no age is stated on the label, all of the whiskies included are rumoured to be between 12 and 14 years of age. The CMR is bottled at a strength of 44% ABV and is now available in specialist whisky retailers and within the travel retail sector, costing £70 a bottle.

The Dalmore distillery is located in the northern Highland town of Alness and overlooks the imposing Cromarty Firth. It was founded in 1839 by Alexander Matheson and has had an interesting history, including being used during the First World War by the Royal Navy to manufacture explosives. The current capacity of the distillery is four million litres per year. Dalmore is currently owned by the famous whisky name of Whyte & Mackay, which is now a subsidiary of the Indian company United Spirits - they own the famous Whyte & Mackay blended whisky brand, plus the distilleries of Fettercairn, Jura and Tamnavulin. United Spirits took over in 2007.

Our tasting notes
The colour is golden amber and the nose is full of sweet aromas which battle for attention.  There are notes of heavy malty cereals (think of malt extract), juicy sultanas, honey, caramelised almonds, stewed apples and golden syrup.  These are joined by further aromas of cinnamon, nutmeg, plus a hint of milky coffee and a whiff of burnt matchstick. It smells 'thick' if that is possible and leaves you in no doubt that you are going to be tasting a sweet whisky ...

On the palate, this feels initially creamy, rich and sweet.  Notes of velvety caramel, golden syrup and crumbly Muscovado sugar offer plenty of sweetness, which is heightened by further notes of honey, vanilla, sweet malted barley and juicy sultanas.  Just when a sugar overload is looking on the cards, some much needed spicy and more bitter notes arrive - think of zesty orange peel and a good serving of gripping and tannic wood spices, such as oak and cinnamon bark.  This creates balance and a pleasing dryness as you go in to the finish.

The finish is slightly short and is overly sweet.  There is plenty of the sugary/syrup notes present and only a hint of the tannic, drying wood spices - these begin to add balance, as on the palate, but never seem to quite achieve it.  Add in some orange zest and a hint of chocolate and coffee right at the end.

What's the verdict?
This whisky has all of the classic Dalmore hallmarks and won't let down the many fans of the distillery or Richard Paterson's work.  It is rich, sweet and velvety on the palate and a definite purchase if you like that style of whisky.  However, while the whisky is good we have a couple of points to raise.

1 - The price is almost double that of the original Cigar Malt and it seems slightly high for something which is 12-14 years old.  It could be more justified if it were a limited edition or at a higher ABV and/or cask strength.  Ultimately, only you can decide if it is worth the cost, as with any other whisky purchase.

2 - We shared our sample with someone who regularly smokes cigars, as we very rarely do. He commented that a heavier, spicier cigar, such as the recommended Partagas, could easily overpower the whisky.  The whisky would need to be richer and spicier itself, or at a higher ABV, to combat this intensity of flavour.  As it stands, our colleague recommends having the Cigar Malt Reserve with a medium-light cigar such as a H. Upmann or Romeo y Julieta, which he feels would match the whisky very well.
posted by Whisky For Everyone at 7:49 PM

I would agree. For bolder cigars, Islay malts are generally best as I have rarely seen a cigar that can overpower the heavy peat characteristic of such whisky.

nice posting.. thanks for sharing.

I would agree: nice posting... and the price is really high. Partagas? Lagavulin :)