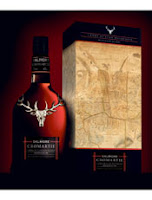 Dalmore have announced the latest bottling in their Mackenzie series.  The third in the series is named Cromartie and this series has helped with the restoration of the Mackenzie family home.  The previous two bottlings - the Mackenzie and Castle Leod - have now sold out and raised over £35,000 towards the renovations.  The distillery is located close to the Mackenzie clan's Highland land, which forms part of the ancient region of Cromartie, thus giving its name to this new bottling.

As mentioned, Dalmore is located in the northern Highlands, on the outskirts of the town of Alness, about half an hour's drive north of Inverness. It was founded in 1839 by Alexander Matheson and has had an interesting history, including being used during the First World War by the Royal Navy to manufacture explosives. The current capacity of the distillery is four million litres per year. Dalmore is currently owned by the famous whisky name of Whyte & Mackay, which is now a subsidiary of the Indian company United Spirits - they own the famous Whyte & Mackay blended whisky brand, plus the distilleries of Fettercairn, Jura and Tamnavulin. United Spirits took over in 2007.

The Dalmore Cromartie is a limited release of just 7,500 bottles, which will retail for £100.  It will be available across Europe in specialist whisky retailers and the travel/duty free sector from late February.  The Cromartie was distilled in 1996 and has been matured in American white oak casks and then ex-Oloroso sherry casks. It has a final bottling strength of 45% ABV. The packaging (pictured, above) features a map of the ancient Cromartie region of the Highlands.

Our tasting notes
The colour of Cromartie is golden amber and the nose is immediately rich and sweet. There are instant aromas of brown sugar, honey, dark dried fruits (think of raisins, sultanas and dates), burnt caramel and plenty of candied orange peel, which is almost marmalade-like.  Underneath are notes of toasted malted cereals and nuts, with a hint of cinnamon and dark chocolate.

From the nose tells you that the palate is going to be rich, and it does not disappoint on that front.  It is rich and feels viscous and syrupy in the mouth.  There is an initial sugary blast which has elements of dark brown crumbly sugar and honey to it.  Then the distinct marmalade orange note comes through and tempers the intense sweetness with its slightly bitter and tangy edge.  Other notes then emerge and fight for your attention - black treacle, dark chocolate, cocoa, warming wood/baking spices (imagine cinnamon, nutmeg and a hint of liquorice), toasted almonds and increasingly influential malty barley.

The finish is of decent length and leaves a thick, sugary coating in the mouth.  The sweetness thankfully subsides as some wood spices (that cinnamon/nutmeg again, plus some oak) and the tangy orange try to take control.  Again, there are nice undertones of dark chocolate and malty cereals.

What's the verdict?
This is whisky exhibits all of the classic Dalmore characteristics.  It is rich, sweet, viscous and full of deep flavours.  It is definitely one for the fans of this distillery or of whiskies with a high ex-sherry cask influence.  Others may struggle with the intense level of sweetness and richness.  The slightly higher ABV seems to exaggerate these characteristics and intensify them, when compared to the softer Dalmore whiskies in their core range (at 40% ABV).  Very interesting and clearly well crafted, but a little over sweet for our tastes.