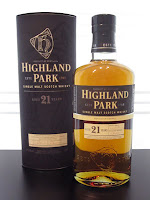 This 21 years old is the eagerly awaited new release from the Highland Park distillery on the Orkney islands.  Why so eagerly awaited?  Well, it has not been available for approximately three years.  The previous version was released in 2007 and won the accolade of Best Single Malt of the Year at the prestigious World Whisky Awards in 2009.  As a result, it sold out in a flash and the guys at Highland Park have been waiting for suitable stock to reach the required quality and age ever since.

Highland Park is the most northern whisky distillery in Scotland. It is found close to the Orkneys' capital Kirkwall and is one of only two distilleries on the main island (Scapa is the other). Highland Park has one of the best selling and most highly awarded single malt whisky ranges in the world. It is currently owned by the Edrington Group and has an annual production capacity of 2.5 million litres.

Highland Park is one of the oldest whisky distilleries in Scotland and was established in 1798 by Magnus Eunson - he was known as the 'whisky priest' because he was a priest at Kirkwall's cathedral by day and (allegedly) an illegal whisky distiller by night, hiding his wares in the cathedral's crypt to avoid the prying eyes of the Customs & Excise men.

So, now the 21 years old expression makes a welcome return.  This 2012 version joins the award winning core range of Highland Park single malts.  It has been created from a selection of ex-bourbon and ex-sherry casks and has been bottled at an alcoholic strength of 47.5% ABV.  This new release is literally just appearing in specialist whisky retailers in the UK now and has a recommended retail price of £99.99. Other markets will follow over the coming months.

Our tasting notes
The colour is a bright golden yellow with a hint of amber. The nose is instantly engaging and there are plenty of luscious aromas to get your interest. This is packed with creamy vanilla, sweet honey, malty cereals and a whiff of warming peaty smoke, which has an edge of minerality to it. Beneath these obvious aromas are more subtle ones - hazelnuts, brown sugar, dried grasses, burnt orange and delicate wood spice, especially nutmeg.

On the palate, this whisky is sublime. It feels initially creamy and has a delicious intensity. There is a heady mix of sweet notes - think of vanilla, honey, toffee, crumbly brown sugar - and savoury notes - imagine wood spices such as nutmeg, dried ginger, hay and an earthy, drying peat smoke. Underneath are softer notes of milk chocolate, candied orange peel and bittersweet cereals, plus a pleasant hint of tropical fruit (something like mango or papaya, but hard to pinpoint). The slight prickle and heat from the ABV compliments all of these elements well and creates an almost perfect balance, depth and complexity. This is stunning, intense and delicious.

The finish is again initially sweet with lovely elements of creamy vanilla, malty barley and honey lingering.  However, it is the soft savoury smoke and the drying wood spices that linger longest. The whisky leaves your mouth watering and with the feeling of wanting to pour yourself another glass. The combination of elements is again superb.

What's the verdict?
This 21 years old is a supreme single malt whisky. It has an incredible balance, texture and intensity - most people that were sampling it with us at a recent tasting event agreed that this was a product of extremely high quality.  We say - bite the bullet and spend £100, as you won't be disappointed. It is worth every penny and every drop.

Highland Park have thrown down the gauntlet to all the other distilleries with the exceptional quality of their first two releases of 2012. Both this 21 years old and the recently released limited edition Thor are excellent and are very early contenders for top spot in our Whiskies of the Year 2012. Don't be surprised to see either whisky pick up a pile of major awards - they are both going to be hard to beat.
posted by Matt C at 7:24 PM

So excited to see this back at 47.5%. The difference between the 21 at this strength and at 40% was night and day.

We at the Quaich Society in St Andrews were lucky enough to have Patsy Christie bring along a bottle of this for us at a recent tasting. I was impressed by its solidity as a mature spirit which could nevertheless still boast a degree of vibrancy through a really engaging fruitiness. I especially liked how the peat note was evocative of the fire grate the morning after. I still boggle at the £100 asking price, though.

It is available at around 92 £.
Although thats a bit steep, its almost cheap compared to HP Thor and the content is at least 5 years older