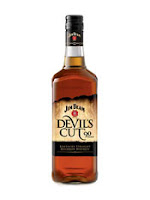 The Devil's Cut is a new addition to the core range of the powerhouse American bourbon distillery and brand of Jim Beam.  It was first released in the USA last year and has been a huge success.  It is expected in to the UK and European markets in mid-2012.  The Devil's Cut is bottled at a strength of 90° proof (45% ABV) and six years of age.  It is currently retailing for between $25-30 in the USA.

The Beam family have a long whiskey heritage, with their first distillery dating back to 1795. This was founded in Washington County, Kentucky by a German immigrant called Jacob Boehm (his surname later became Americanised to Beam). The current distillery was founded in 1933 at the end of Prohibition in the USA and is located in the town of Clermont in the famous whiskey producing state of Kentucky.  It is currently run by the seventh generation of his family - the Master Distiller is Fred Noe, who is the great grandson of Colonel James B. Beam (or Jim Beam as he is famously known).

We were delighted to meet Fred Noe at an event in London earlier this week and he had managed to sneak a bottle of Devil's Cut in to the UK for it.  When talking to Fred, he was immensely proud of Devil's Cut as it is the first new product for the core range that he has personally developed since he became Master Distiller five years ago. The story behind the whiskey and the name as Fred tells it is as follows ...

When whiskey is maturing in a cask it is pulled in and out of the wood as time progresses.  When the cask is emptied for bottling, some of this whiskey remains in the wood and is potentially lost.  By using a technique called 'sweating', some of this whiskey can be removed from the wood - this involves putting about two gallons (7.5 litres) of water in to the empty cask and shaking the cask for around 30 minutes.  This pulls some of the whiskey out of the wood and this 'whiskey water' is then drained off and used to dilute the final product, instead of regular spring water.  The 'devil's cut' is the name given by Fred to the whiskey trapped inside the empty cask, as it is the opposite to the 'angel's share' which is evaporated alcohol that has escaped from the cask during maturation.

Our tasting notes
The colour of Devil's Cut is a rich golden yellow and the nose is packed with expressive aromas.  There is plenty of immediate vanilla, coconut and brown sugar.  There is also a scent of distinct malty cereals and some toasted oak, which are backed up by more subtle wood spices (think of nutmeg especially) and a hint of burnt orange.  It is very, very promising indeed.

On the palate, this is rich, velvety and pleasantly oily with plenty of initial sweetness.  The main notes here are vanilla, honey, butterscotch and caramel and this makes it feel very soft.  However, it is not long before other elements kick in and balance that intense opening sweetness.  Included here are some robust cereals (these are not as sweet and malty as on the nose, but more bittersweet), burnt orange, toasted almonds and plenty of lovely, tannic wood spice - imagine cinnamon, nutmeg and oak. The oaky note seems to increase as you let the whiskey sit in your mouth for longer. The balance and harmony of all of the combined elements is sublime and very good.  The strength suggests adding a few drops of water and with this, it becomes creamier and even softer with the vanilla coming to the fore and the woody spices being knocked back slightly.

The finish is very long with the woody spices and robust cereals lingering for what seems like forever.  Again, it begins sweetly but the spice/cereals take over quickly and leave your mouth watering and wanting more.  There is a delicious hint of the burnt orange which rounds everything off perfectly.

What's the verdict?
The Jim Beam Devil's Cut is an absolutely superb whiskey and one of the best in the bourbon category that we have ever tasted.  It excellently combines good sweetness with delicious, gripping woodiness and spiciness.  The Devil's Cut has won rave reviews in America and is taking that market by storm.  It should do the same when it hits its new markets later this year and it deserves to.

Hats off to Fred Noe, as he has produced a stunner of a whiskey.  If you are in the USA - lucky you, go out and buy a bottle now.  If you're not (like us) - make a mental note and keep your eyes open for when it get released. You won't be disappointed.

when do we expect it to be in Auseralia...cant wait to try it

Stogies On The Rocks said...

Great review. I love the idea behind this concept. When I toured the distillery they talked about the Angel's Share and I'm glad to see this play on words. Great bourbon as well!

That stuff is pretty brutal...lol!

Drinking it neat now. Tasty stuff.
Somehow got it for $36 in Aus at corner bottle store.