The Clan Speyburn & The Clan Cask

The Speyburn distillery have just launched a new members club for fans of its single malt brands - The Clan Speyburn.  The club has its own members area on the new Speyburn website and membership is free.  You can sign up via the same website ... oooh, and it's free to join!

Benefits of membership include a welcome pack including a Clan Speyburn pin badge complete with the brand's salmon motif (- we just received our pack and it looks pretty good), a regular newsletter about all things Speyburn and special offers including exclusive Speyburn bottlings for Clan Speyburn members.

We were delighted to receive a sneak preview of the first such bottling in the post recently and have included our tasting notes below.  The Clan Cask was distilled in 1975 and is one of the oldest expressions of Speyburn ever released.  The whisky is from a single specially selected ex-Pedro Ximinez sherry cask.  It will be bottled at the natural cask strength of 55.8% ABV and will be available exclusively to members in the late Summer.  Details of the number of bottles and the price have yet to be released.

The Speyburn distillery is located in the town of Rothes, in the heart of the Speyside whisky region of Scotland.  It was founded in 1897 by two brothers, John and Edward Hopkin, and their cousin Edward Broughton.  The current annual production capacity is two million litres and the single malt range is small.  Speyburn whisky is particularly popular in the America market and is growing in others such as the UK and Europe.

The core range contains a 10 years old (pictured) and the youthful Bradan Orach (which translates as 'golden salmon' from Gaelic), and is starting to pick up a good collection of awards from whisky shows and competitions around the world.  Speyburn is one of the five Scottish distilleries owned by Inver House Distillers, who took control in 1991.  They are now part of the larger Thai Bev Group, which has other brands such as Chang Beer. 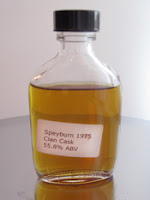 Our tasting notes - The Clan Cask
The colour is a dark golden amber and the nose is rich and full of lovely aromas - burnt caramel, brown sugar, dark chocolate, coffee, golden syrup and plenty of dry wood spices (think especially of cinnamon and nutmeg).  Underneath are further developing notes of dark dried fruits - imagine prunes, figs, dates and raisins, plus a hint of dried orange peel.

On the palate, this feels rich, thick and spicy.  It coats the inside of the mouth wonderfully and there is an immediate battle between the sweeter notes and the spicier ones.  The sweeter notes include distinct notes of butterscotch and maple syrup, while the spicier notes counteract these and add a lovely dryness - think of the cinnamon and nutmeg again, plus hints of clove and sandalwood.  Depth and complexity is added with an array of further notes including orange oil (or possibly marmalade), burnt caramel, bitter chocolate and the dark dried fruits from the nose.  The prunes are particularly prominent towards the end.

The finish is long and particularly drying and spicy after a sugary hit to begin with.  The bitter chocolate and dark dried fruits combine with intense and gripping notes of cinnamon and nutmeg, along with some delicious spiced orange.

posted by Whisky For Everyone at 10:26 PM