Within Inbox we write a few lines detailing each press release/piece of news/PR event that we have received and provide links, where possible, for you to find out further information.  There is plenty of news to get through this week, so grab a dram and put your feet up ...

Dewar's - Get experimental
The popular blended Scotch brand of Dewar's have announced the creation of a bespoke blend.  The new limited edition is inspired by the innovative work of Tommy Dewar, the son of the brand's founder John Dewar Snr, who progressed the brand and built the company's London base Dewar House.  The Dewar House Experimental Batch 39 has been developed using a cask of regular Dewar's 12 years old, which has then been finished in an ex-sherry cask for the last five years.  Only 30 bottles will be initially produced.  Check out the short video below where Stephen Marshall, the Global Brand ambassador for Dewar's, explains about their new creation ...

Glen Garioch - Joins the jet set
The cult Highland distillery of Glen Garioch have teamed up with a major airline to celebrate the airline's continued success.  Air France KLM are one of the biggest airlines serving Scotland (five airports in total - Aberdeen, Dundee, Edinburgh, Glasgow & Inverness) and decided to celebrate their extended Scottish programme of 38 flights a day by selecting a single cask of whisky. Air France KLM staff visited the Glen Garioch distillery earlier this year and selected an ex-bourbon cask, which has been maturing since 1998. It was chosen for its sweet roasted almond notes mixed with intense dark chocolate and wood spice, finished with smooth and creamy hints of vanilla and coconut. Bottles of the single malt will be distributed to Air France KLM's staff, plus business and leisure customers.

Glenrothes - Makers make Vintage
Last year we reported on the second Glenrothes Vintage Makers competition, which offered the chance to take part in every aspect of the whisky making process at the Speyside distillery. The winners included four from Americans, one from Canada and one from Taiwan, and they have just returned from Scotland after laying to rest the 2012 Vintage of Glenrothes single malt whisky.

A balance of first-fill American ex-bourbon and Spanish ex-sherry casks, as well as refill casks from The Glenrothes, were filled with new make spirit from 2012. Bill Kiel from Wisconsin, one of the Glenrothes Vintage Makers commented, “the group decided that the 2012 Vintage should have a ‘conversational’ style about it. However, we cannot be certain of the flavor profile or the quantity that will be selected. What we can be sure of is that the maturity will be there, no matter what the age”.

Macallan (pt.1) - New UK range
The famous Speyside distillery of Macallan have unveiled details of a new range of whiskies which will initially be exclusive to the UK market later in the year - The 1824 Series.  The first three whiskies will be named Gold, Sienna and Ruby and will not carry any age statements.  All are 100% ex-sherry cask matured in the classic Macallan style.  Price points  and exact release dates are yet to be announced.

Ken Grier, the Director of Malts for the Edrington Group (Macallan's owners) comments, “The 1824 Series will introduce a new approach to The Macallan in the UK market for single malt drinkers to enjoy and underlines our ongoing commitment to leading innovation. The move represents a major step in the evolution of The Macallan and we are extremely excited to be introducing this into the UK market first.”

Please note - There are two heavy rumours circulating around the whisky world following the news. 1) the three new whiskies will be replacing the current 10, 12 and 15 years old expressions in the range, and 2) that the new direction will lead to the phasing out of the Fine Oak series in the core range.  If true, the debates are bound to rage with both Macallan and whisky fans around the world, and we will keep you up to date when we hear anything further on this. 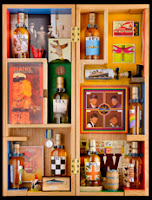 Macallan (pt.2) - Pop art box
Also this week, Macallan have announced a special release to celebrate the 80th birthday of renowned British pop artist Sir Peter Blake.  The release comes in the form of a bespoke box named The Macallan and Sir Peter Blake celebrate eight decades.  It consists of an oak box, divided in to eight sections with each section marking a decade of Blake's life.

Each decade has a backdrop and artefact designed, inspired and chosen by Sir Peter Blake, plus a miniature of The Macallan distilled in that decade (1930 through to 2000’s).  The bottle labels are designed by Blake and there is also a small book of illustrations and text about his life. There are only 250 boxes for sale, with a small number available from the website www.themacallan.com and the rest allocated to key markets around the world. The guide price is £4,500 each.

Malt Mill - A rare discovery
The legendary whisky that is Malt Mill has put in an unexpected appearance that has got whisky lovers very excited. Malt Mill was made at a small distillery on the Lagavulin site on Islay from 1908 with production ceasing in 1962 and this bottle is from the last fill in June 1962.

It was discovered by current Lagavulin distillery manager Georgie Crawford after watching the new movie The Angel's Share, which has an imaginary cask of Malt Mill as a central part of the story line.  The bottle will be displayed in the Lagavulin visitor centre for all to see and the unveiling was attended by cast members of the movie and Lagavulin workers past and present, including Donnie MacKinnon - the worker who filled the bottle in 1962 (pictured, above).

Charles Maclean, one of the world’s leading whisky writers (who also appears in The Angel's Share movie) comments, “This bottle is priceless. Malt Mill is legendary, and is viewed by many as the holy grail.” Dr Nick Morgan, Head of Whisky Heritage at Diageo, adds, “In my twenty years as an historian and archivist, I’ve always wanted to see this unique bottle of Malt Mill go on display. We are thrilled to share this precious artefact with those who visit Lagavulin every year.”

Tomatin - Visitor centre facelift
The Highland distillery of Tomatin have completed some upgrading work on its visitor centre in time for the Summer rush.  The £150,000 investment has seen the visitor centre extensively refurbished, improvements to the visitor tours (including more viewing of the production areas) and a new facility where visitors can bottle their own whisky from one of two selected casks.  The new facilities have already been awarded a 4* rating by VisitScotland and Tomatin are expecting figures to rise to over 20,000 visitors this year, for the first time.  Details of the visitor centre opening times and information about the tours can be found at www.tomatin.com.

posted by Whisky For Everyone at 7:08 AM