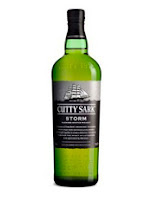 The legendary blended whisky brand of Cutty Sark have just launched a new expression in to their core range - the Cutty Sark Storm.  The new permanent fixture to the range will take its place in a slimmed down new range, which now includes the regular Cutty Sark, the Storm, plus two age statements - the 12 and 18 years old.  Out go the old Cutty Sark Black, the Blended Malt and the 15 years old.  This range will be supported by other limited releases, such as the recent Tam o'Shanter 25 years old.

The Cutty Sark brand was born in March 1923, allegedly following a lunch between the owners of the famous London wine and spirits merchants Berry Brothers & Rudd (Francis Berry and Hugh Rudd) and Scottish artist James McBey. It was named after the Cutty Sark, the famous tea clipper, and legend has it that McBey started drawing the logo of the boat on a napkin. The brand was aimed at the export market and in the post-Prohibition era in America it rapidly grew to become the best selling Scotch whisky there.  Cutty Sark remains one of the biggest selling whisky brands in the world and is currently owned by the Edrington Group.

The new Storm is the latest creation of Cutty Sark Master Blender Kirsteen Campbell. She has used many of the whiskies used to create other expressions of the Cutty Sark range, including grain whisky from North British and single malts from Highland Park and Macallan. The differences are the higher percentage of single malts used in Storm, and these single malts are considerably older. It will be available shortly across the globe, including key markets such as Greece, Portugal and the UK, with a retail price of around £20.

Our tasting notes
The colour is a bright golden yellow and the nose is instantly sweet with rich aromas of crumbly brown sugar, raisins and sultanas.  Add some golden syrup and lots of butterscotch in to the aroma mix, plus plenty of underlying barley cereals and a hint of delicate baking spices (think of cinnamon and five spice).

On the palate, this feels quite velvety, rich and mouth coating.  It is immediately sweet with the brown sugar and golden syrupy notes from the nose evident, before some balance comes in the form of lovely baking spices (imagine cinnamon and nutmeg especially) and a distinct hit of bitter orange.  The tangy nature that this orange note brings is softened by some pleasant dried fruits (the raisins and sultanas again, plus some apple).  Some bittersweet cereal notes add some further complexity and depth of flavour.  It feels very balanced and controlled, which are qualities that some blended whiskies in this price bracket can often lack.

The finish is relatively long and grips your taste buds.  This begins sweetly as before, and again is balanced with some drying wood spices and the bitter orange.  It is the spices that hang around longest and these seem to extend the finish beyond its natural end.

What's the verdict?
The Cutty Sark Storm is a very good and easy drinking whisky that is a welcome addition to the range.  It is rich, balanced and has plenty of character, depth and complexity.  When you consider these elements, plus the fact that it is at the £20 price point, then it quickly becomes an attractive proposition.  The price seems like a bargain for a whisky of this quality, richness and flavour. Excellent stuff.