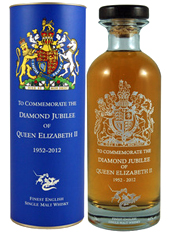 To celebrate the UK's Royal long weekend we decided to try a whisky that certainly marks the event.

This English Whisky Company bottling is to commemorate the Diamond Jubilee of Queen Elizabeth II which celebrates 60 years of her reign. This small batch production whisky is produced from a combination of bourbon cask and red wine cask matured whisky. It is bottled at 46% ABV in a decanter style bottle as a limited edition with 3300 bottles produced and only 1140 bottles available for sale in the UK. To order a bottle (at a cost of £59.99 each plus postage), go to www.englishwhisky.co.uk or check with a British specialist whisky retailer.

St. George's Distillery is operated by The English Whisky Company, which was founded in 2005 by Andrew and James Nelstrop. It was the first whisky distillery to be built and produce whisky in England for almost 200 years. The distillery is located in the heart of East Anglia, close to the town of Roudham in Norfolk (about 2 hours north east of London). The first spirit came off the stills in November 2006 and was overseen by legendary (and retired) whisky maker Iain Henderson, who had previously managed the famous Laphroaig distillery on the island of Islay, amongst others. The role of Distillery Manager now falls to David Fitt, an ex-brewer from Greene King, who was trained by Iain before he retired again.

St. George's spirit is made, where possible, from locally grown Norfolk barley, and the entire process, from milling to bottling, occurs on site. The distillery has already won many plaudits for its innovation and quality.

Our tasting notes
This whisky is a vibrant golden hue that comes from the mixture of casks (no colouring is added) which is a shade that was described at a recent whisky tasting event as a 'classic' whisky colour.

On the nose the first impression is sweet notes of butterscotch, golden syrup and sultanas. This is not over powering, as it is matched by fresh notes of green grass and tangy apples, with woody warming spiciness of cinnamon and nutmeg. With water the whisky shows more pronounced floral notes of rose and honeysuckle with green apple freshness, but certainly doesn't lose the sweetness or spiciness.

On the palate the strength is noticeable and the whisky is less sugary sweet than expected, despite there being definite toffee and sultana characters. The red wine shows here in way of darker red apples and prunes along with plenty of warming spices and oily nuts such as almonds. The finish is short and dry with spiciness and mouth watering tannins. There are lots of wood spices and a touch of red chilli pepper. With water the palate has extra creaminess but maintains sweet notes of toffee and apples. The spiciness is pushed to the back but remains on the finish. All in all we think that this whisky has extra desirable characters when tasted at the higher ABV strength so we are pleased that the decision was taken to bottle at 46% and allow drinkers to add to water to their own taste.

What's the verdict?
This commemorative bottling is a whisky created to be collectable yet remarkably approachable. It is at a price, rarity and strength that make it a good purchase for the occasional whisky drinker who wants something to remember the event by that is more desirable than a collectable teapot. Having said that we don't think that serious whisky collectors would be disappointed either. It is not overly complex but certainly offers fabulous value for money.

This is a remarkably affordable bottling to celebrate the Queen’s Diamond Jubilee, especially when compared to many other less rare 'limited' celebratory releases. While we expect that many people will be buying the bottle to collect we thoroughly suggest that you don’t just leave it on the shelf but do give it a try.
posted by Karen at 9:40 PM