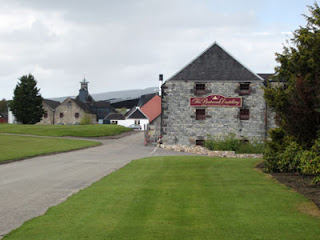 The Balvenie distillery is located in the famous Scottish whisky town of Dufftown in the heart of the Speyside region. It is still owned by the original founders, William Grant & Sons, and was built in 1892 to help their other overworked distillery at Glenfiddich, which is next door. It was named after the nearby Balvenie Castle, which was built in the 13th century.  Balvenie has grown to be one of the largest and most well known distilleries in Scotland. It is also one that we have always wanted to visit, as it was a Balvenie (the Doublewood 12 years old) whisky that was one of the first products to get us interested in whisky.

Balvenie is almost unique in distillery terms - it has its own floor maltings (the room used for the germination of the barley), a cooperage where they construct casks and they even grow some of the barley used for production on land very close to the distillery. The modern whisky industry sees the majority of these processes being completed by external companies. This uniqueness and heritage helps Balvenie sell 1.5 million bottles of whisky across the world, putting it well inside the top 10 for total sales of single malt.

To get a tour at Balvenie, you have to book in advance.  The tours operate at 10am and 2pm each day for Monday-Thursday, and at 10am only on Fridays.  There are no tours at weekends.  It costs £25 per person and includes a detailed tour around the distillery and cooperage, plus a tasting of the Balvenie single malt range at the end.  It also offers the unique opportunity to fill your own bottle of Balvenie straight from the cask for an additional fee.  For more information and to book - visit www.thebalvenie.com. 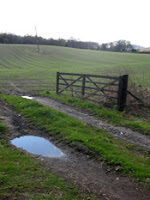 On our recent visit to Dufftown we were lucky enough to be shown around Balvenie by Jamie Milne, the UK brand ambassador for its sister single malt of Glenfiddich.  A huge thanks to Jamie for that.  To get to Balvenie, you have to walk through the huge Glenfiddich distillery complex and this is where we began.  Across the road from here is where some of the barley for Balvenie is grown (pictured, left).  It is still early in the year and the young green shoots are just poking through the soil. 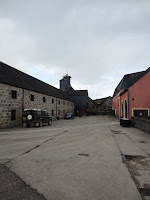 After a 10 minute walk that flirted with the sights and sounds of Glenfiddich and took us under the disused railway line that separates the two distilleries, we end up on the approach to Balvenie. It was a bracing walk, thanks to a biting cold wind, and it was threatening to snow (in May!?).  The distillery looked good, combining original stonework on some buildings with a slightly gentrified pink paint job on others.  Smoke was drifting out of the triangular pagoda. 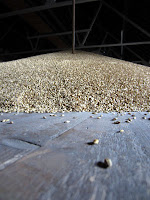 The first stop was to see the malting facilities.  From memory, this is the first distillery that we have visited that have this in full operation.  The malting barn (on the left of the above picture) has two floors.  Upstairs is where the barley is stored and prepared for malting.  It was cool and dimly lit - the barley is steeped in water in one of two huge tanks for a couple of days, before the water is drained and the barley is transported by a chute downstairs. 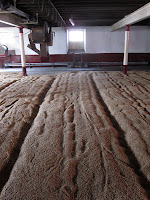 The ground floor is where the barley is laid out to germinate.  The damp barley is laid out across the floor to a depth of about eight inches.  This then starts to germinate, which turns the starch in to the sugar which is essential for creating alcohol.  The barley has to be turned regularly to prevent a build up of heat and to stop the growing roots and shoots from becoming entangled.  There are very few distilleries in Scotland with floor maltings in full operation and Balvenie's produces around 30 tonnes of malt per week - this is about 10% of what the distillery requires, with the rest coming from commercial malt suppliers. 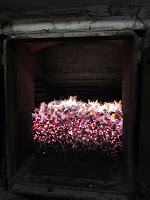 After a few days, the germination needs to be stopped as the barley will then start to use the sugars created to begin full growth.  This process is completed in the traditional way at Balvenie by drying it in a kiln. Again, we had never seen a kiln in action at a distillery.  Each batch of malted barley is loaded in to the pyramid shaped pagoda above the kiln, and then the kiln is lit.  The smoke permeates through the grain and dries it out, therefore stopping the germination.  Interestingly at Balvenie they begin the process by burning peat for around five hours, before switching to coal for the remaining 40 hours or so.  The resulting smoke was what we had seen on our approach to the distillery. 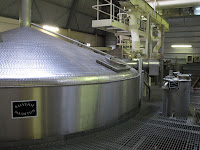 Our next stop was the mashing room.  This contained two huge mash tuns - these are the steel vessels where warm water is added to the milled malted barley and the soluble sugars in the barley are extracted.  The final liquid is called wort. It turned out that only one of these mash tuns was used for the production of Balvenie whisky, with the other being used for Balvenie's sister distillery of Kininvie (more on Kininvie later ...).  Both can hold nearly 11 tonnes of malted barley at a time and have a capacity to run up to 28 mashes a week. 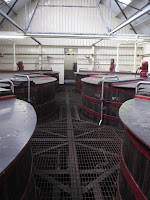 We moved quickly on to the adjoining room which housed a number of wooden washbacks (nine from memory ...).  These are the massive tanks where the wort has yeast added to it, and subsequently the fermentation takes place to turn the soluble sugars in to the required alcohol.  The resulting liquid is now called wash and has a rough alcoholic strength of about 7-8% ABV.  Balvenie also uses some stainless steel washbacks which are housed in another room, but we did not get to see these.  We were also briefly shown a neighbouring room next door which housed some of the wooden washbacks used for the production of wash for Kininvie. 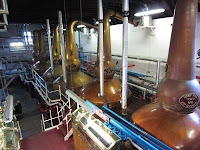 Next was the still room, well one of them anyway.  Balvenie has two - there are a total of five wash stills (where the first distillation takes place) and six spirit stills (where the second distillation that produces the final spirit takes place).  Between them they produce around 5.5 million litres of spirit in a year.  The stills seemed tall, large and imposing, even from the raised level that we viewed them from.  Sadly, then it is time to head out from the lovely heat of the still room back out to the freezing, bracing Scottish weather. 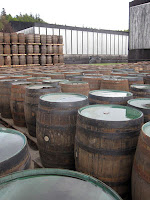 Jamie decided to show us the cooperage, which is another of Balvenie's traditional features.  Historically, most distilleries would have had a cooperage to make their casks but now very few do.  In fact Balvenie are the only distillery to still have their own coppersmith tending to the stills as well, and he has been doing that job for over 50 years!  The cooperage was closed, which was a shame as it was something else that we had never seen in full operation before. However, we spent some time dodging the icy snowflakes and wandering around amongst the thousands of different sized casks that were waiting to be either reconditioned by the coopers or filled with new make spirit. 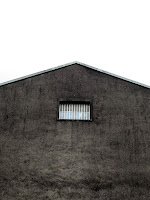 The cooperage is tucked away at the far end of William Grant's facility.  It is only when you are walking to it from Balvenie that you begin to understand the sheer enormity of the place.  There is a staggering total of nearly 50 warehouses on the site, which house whisky produced at Balvenie, Glenfiddich and Kininvie.  There are three types of warehouse - traditional dunnage (stone walls, low roof, earth floors), racked (casks are stacked on racks) and palletised (casks are stacked from floor to ceiling on pallets).  All of the warehouses, plus the trees and any other static objects (including the fire hydrants!) are covered in a black coating.  This is caused by tiny organisms which feed on the alcohol vapours that are released as the whisky matures in its cask.

As we head back, we catch a glimpse of the mysterious distillery that is Kininvie.  Not much is known about it and the single malt produced there is rarely released in its own right.  Kininvie (pictured, below) was built in 1990 and produces large quantities of single malt (nearly five million litres per year) that are used heavily in the Grant's range of blends and William Grant's popular Monkey Shoulder.  As mentioned earlier, the mash tun and fermentation washbacks are housed within the Balvenie buildings but are maintained and operated separately.  Kininvie's still house is functional rather than attractive, being made out of corrugated metal, and is home to three wash stills and six spirit stills. 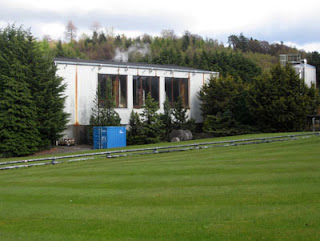 The regular tour of Balvenie is completed with a whisky tasting of the Balvenie range, but ours is sadly cut short by having to rush off to another engagement.  It is easy to look at the £25 price tag for the Balvenie tour and think that it is expensive, but what this distillery offers you is worth it.  As mentioned, the distillery is almost unique and gives you the chance to see parts of the production process that can rarely be seen elsewhere - barley growing, plus a full working malting barn and cooperage. In addition to all of this, the Balvenie single malt range is excellent and the tour experience backs up the 'traditional feel' that the brand promotes.

posted by Whisky For Everyone at 6:56 AM

A fantastic write up, again, and thank you for those extra details. I like to know whether there is a mix of fermentation vessel materials and how many wash to spirit stills are in operation.

If my experience can act as a cuationary tale for anyone, book early! This was one of the most annoying 'nearlys' of the Scotch Odyssey as I didn't book in time. I will get inside one day, though. Also, do expect snow. I learnt that, too.

Excellent post; Ill be visiting The Balvenie and Glenfiddich in a few days and Im really glad to have read these incredible details beforehand (and the cold/snow detail in May;))

This is a permanent addition to the core range of the famous Ballantine's blended Scotch whisky range, released in September 2020. The B...