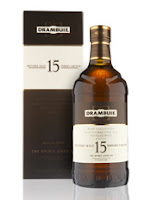 At Whisky For Everyone we do not often dip in to the world of whisky liqueurs.  As with many consumers, we enjoy the occasional sip around Christmas time but that's about it.  We recently had the opportunity to try a new(ish) product from one of the leading brands in the category.  Whisky liqueurs seem to have a poor reputation and are regarded as being sugary and super sweet. However, despite the category shrinking dramatically in recent years there are still some lovely examples on offer.

One such example is the Drambuie 15 years old - the aforementioned new(ish) product.  Drambuie is a classic old brand which dates back to the 1870s, when it was produced by hotel owner John Ross for patrons in the bar of The Broadford Hotel on the isle of Skye.  Legend has it that Ross had received the secret recipe for the liqueur from an ancestor of John MacKinnon, who in turn is said to have received it from Bonnie Prince Charlie as a thank you for helping him escape to Skye after the Battle of Culloden in 1746.

The name of Drambuie is said to have come from one of the hotel bar patrons, who described the liqueur in Gaelic as "an dram buidheach", or "the drink that satisfies" when translated to English.  The name stuck and Drambuie was first manufactured commercially in 1909 by MacBeth & Sons.  This company later became The Drambuie Liqueur Company, who still produce it today.  The brand is now one of the world's biggest selling products in the whisky liqueur category and is the main ingredient in a Rusty Nail, the popular cocktail.

The Drambuie 15 years old is a relatively recent addition to the range, appearing in Autumn 2011.  It is bottled at 43% ABV, which is quite high for a liqueur, and has a high percentage of 15 years old Speyside single malt (non specified distillery/distilleries) as the base in the recipe.  Along with the whisky, there are also honey, herbs and spices included.  A bottle should cost around the £35 mark from specialist liquor retailers and some high end supermarkets.

Our tasting notes
The colour is golden yellow with a hint of amber, and the nose is immediately aromatic with sweet, rich and zesty (think of orange especially) notes.  The sweetness is driven by aromas of honey, toffee, vanilla and dried fruits, particularly sultanas and raisins.  This is tempered by some notes of bittersweet cereals, burnt caramel and plenty of wood spices such as cinnamon and nutmeg.  Very pleasant.

On the palate this liqueur is rich, sweet and mouth coating.  There is plenty of initial sweetness, which again comes in the form of golden honey, toffee (or perhaps butterscotch?) and the dried fruit from the nose.  A distinct and tangy orange note is never far away and adds a lovely zesty, slightly juicy edge in the mouth.  This tends towards spiced orange as the immediate tangy feeling begins to fade.  This spiciness (think of cinnamon bark, aniseed and cloves) becomes more prominent with time and gives a nice depth and complexity, as do further notes of malty cereals and dried grass.

The finish is sweet and tangy again, and grips the taste buds.  The ABV strength aids this and adds intensity.  The spiciness is again there and it is these notes which come to the fore as the sweeter ones fade.  A lovely drying and lengthy dose of cinnamon and nutmeg are evident, along with further hints of liquorice and clove.

What's the verdict?
The Drambuie 15 years old is one of the nicest whisky based liqueurs that we have tried to date.  As mentioned, the alcohol strength helps to exaggerate the aromas and flavour and give the liqueur a good, gripping mouth feel.  In inclusion of a decent percentage of well aged single malt is helping also and adds the depth, complexity and drying spiciness that other similar products seem to lack.  An excellent effort we think.