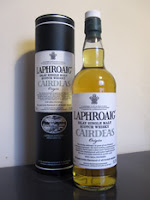 When the recent news came through that the famous Islay distillery of Laphroaig (pronounced la-froyg) had made a limited amount of their annual Cáirdeas whisky (an annual bottling for the Islay Festival) available for purchase to Friends of Laphroaig members, then we had to act quickly and order one having missed out in previous years.  This year's Cáirdeas release celebrates the 18th anniversary of the Friends of Laphroaig - a members club for fans of the Islay malt (you can sign up for free at www.laphroaig.com).

Laphroaig is one of the most famous whisky brands in the world. The name is derived from the Gaelic for 'beautiful hollow by the broad bay' and the distillery is located on the island of Islay, which lies off the western coast of Scotland. Both Laphroaig and Islay are renowned for producing very smoky, peaty flavoured whisky. The distillery was founded in 1810 by two brothers, Alexander and Donald Johnson, and is currently owned by drinks company Beam Global. It has an annual production capacity of 2.9 million litres and the Laphroaig 10 years old is also the best selling smoky whisky in the world.

Cáirdeas is the Gaelic word for 'friendship' and is pronounced in a variety of ways, the most common being caar-diss. The 2012 version is created from a mix of different styles of Laphroaig - 50% is made up of whisky aged between 13 and 21 years of age, and the other 50% is whisky which has been specially maturing in quarter casks for seven years.  It has been bottled at 51.2% ABV and was available for £45 a bottle + postage. That sounded like a bargain to us and it has now sold out, so lots of people agreed with our assessment!  Our bottle survived the UK postal system and has just arrived, so here is what we think about it ...

Our tasting notes
The colour is a pale golden yellow and the nose is instantly packed with powerful and feisty aromas.  A tar-like acrid smoke is the most obvious characteristic and this feels like it initially overpowers everything else, but with time there are some distinct notes of sweetness in the form of honey and golden syrup.  Underneath these are more subtle aromas of malty cereals, vanilla and hints of brine and damp earth.

On the palate, the whisky feels slightly oily and a little fiery and hot.  The flavour profile follows a similar direction to that of the nose and kicks off with a large hit of peaty, acrid smokiness.  This smoke has elements of coal tar soap, oily rags and damp moss to it and is very expressive.  As the smokiness begins to fade, other elements are revealed and these create a delicious balance.  The first of these elements is a distinct high sweet note of icing sugar,  - think of oat cake biscuits, bittersweet cereal grains, honey, vanilla, a pinch of salt and hints of aniseed, nutmeg and red chili.

The finish is very long with the powerful smokiness lingering for a significant time.  Initially there is some of the cereal and honey-like sweetness as seen on the nose and palate, but once this fades then the finish becomes dry and mouth watering.  The prominent peat smoke exaggerates this.

As this whisky is bottled, we added a few drops of water.  This didn't have any impact on the power and flavour of the peat smoke, but took the edge of the heat and spiciness of the alcohol.  The whisky became creamier and softer with the vanilla, honey and cereal notes seeming more prominent.  Which ever way that you choose to drink it, this whisky remains delicious and won't disappoint.

What's the verdict?
This year's version of the Laphroaig Cáirdeas is a wonderfully charismatic whisky.  It packs a powerful peaty punch and is a great example of the smoky style of whisky.  As a result, it will not be everyone's cup of tea - the extremely smoky whiskies are widely regarded as an acquired taste after all.

Laphroaig are one of the best exponents of this style and we feel lucky (and glad) that we have finally secured one of these special releases, after previous failures.  For those of you that have been equally as successful - well done and enjoy your reward.  For those of you not so fortunate - there's always next year, as we kept telling ourselves ...