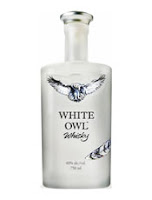 The White Owl whisky is a filtered, clear rye whisky made by Highwood Distillers in Alberta.  It has taken the cocktail world by storm and took first prize in the Canadian Whisky Innovations category at the second annual Canadian Whisky Awards earlier this year. The awards were held in Victoria, British Columbia and are the brainchild of our good friend Davin de Kergommeaux - the world authority on Canadian whisky and writer of the must-read website canadianwhisky.org.

Highwood Distillers is an independently owned company which is based in the Rocky Mountains of the Canadian province of Alberta. The distillery is in the town of High River, while the company offices are in the city of Calgary.  Highwood Distillers was founded in 1974 and the distillery was originally called Sunnyvale.  This was changed to Highwood in 1984 and the company is still going strong after nearly 40 years.  They also make other spirits including gin, vodka, rum and liqueurs.  For more information on Highwood and their products - visit www.highwood-distillers.com.

We don't get to taste many Canadian whiskies as they are still relatively scarce in the UK market, and it is an area of the whisky industry that we want to learn more about.  Therefore we were excited when a sample pack from Highwood dropped through our letterbox recently.

On initial inspection, the White Owl appeared to be a product similar to the 'white dog' whiskies being released in America or the new make spirits being released by some Scottish single malt distilleries.  These products have little or no maturation before bottling.  However, the story with the White Owl could not be more different ...

The White Owl is produced in small batches and is made up of rye whiskies that have been matured between three years (the Canadian legal minimum age for whisky) and 10 years of age.  The proportion of older whisky is high and the whiskies are then married together, before being filtered through charcoal to remove the colour.  Therefore, it has all the characteristics of an aged rye whisky but with no colour - this has made it extremely popular with bar tenders across north America.  The White Owl is bottled at 40% ABV and is currently available only in Canada.  A bottle will cost $40 CAD (that's about £25).

Our tasting notes
This whisky is completely clear and the nose is fresh, clean and vibrant.  There is an instant zesty citrus aroma which is reminiscent of lemons and limes.  This is supported by some robust cereal aromas that give an impression of vanilla and a slight earthy quality.  In addition there is something uplifting and fresh (think of crisp green apple) and a hint of cinnamon and liquorice.

On the palate, this has an initial hot spicy feel but once it settles in your mouth it feels quite delicate and a little creamy.  There is an initial hit of sugary sweetness (imagine a pleasant mix of icing sugar and honey) which is added to by some notes of butterscotch and toffee.  These sweet characteristics are tempered by some delicious and slight feisty cereals, which add a spiciness to the palate - think of cinnamon, nutmeg, liquorice and a hint of ginseng.  The zesty citrus notes evident in the nose are also present (especially the limes) and these seem to grow with time.  It is not the most complicated of palates, but there is plenty of interest going on.

The finish seems short-ish and begins with the lovely butterscotch sweetness.  This then gives way to the zesty and spicy notes, which give the finish a refreshing tang and dryness.  Imagine limes, cinnamon and a hint of red chilli.  It is the chilli-like heat that lasts longest.

What's the verdict?
The White Owl is impressive.  It may be clear but what it lacks in colour, it more than makes up for in aroma, flavour and quality.  The evidence of whiskies of a decent age gives it a depth and quality and it is easy to see why it has become so popular with bar tenders and cocktail mixologists.  The White Owl will add a depth and quality to a drink that a new make or 'white dog' spirit simply cannot.  A delightful discovery and one that confirms that we have to learn about and try more Canadian whiskies.
posted by Matt C at 7:03 AM

I was passing through Canada and I wanted to get a nice whiskey to put in my bar in Alaska the woman at the store asked me if I tried this I said no I purchased one and something else OMG this is wonderful stuff I wish I could get it somewhere else I just have to go back to Canada to buy it I guess.