Within Inbox we write a few lines detailing each press release/piece of news/PR event that we have received and provide links, where possible, for you to find out further information.  So what has grabbed our attention this week?  Find out below ...

Benriach - New single casks released
The award winning independently owned distillery has announced the latest batch of it renowned single cask releases.  This is the ninth such batch that they have released and it comprises a total of around three thousand bottles from ten casks ranging in age from 22 to 35 years. All ten casks have been hand-selected by BenRiach’s Managing Director Billy Walker. The prices for each bottling were not included in the press release, but the other cask details are as follows, 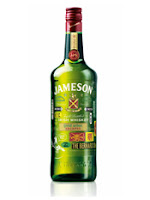 Jameson - Exclusive bottle revealed
The world's best selling Irish whiskey brand has announced the launch of a limited edition bottle that will be exclusive to the travel retail sector.  Named the Jameson Great Urban Escape, the bottle features iconography from seven of the world's most exciting cities including Dublin (the home of Jameson), London, New York, Paris and Stockholm.  Within this are featured bars in each city where Jameson is the 'whiskey of choice'.

To support the launch, a city guide app has been created to provide travellers with an 'insider guide on what to see and do' in four of the cities. To access this app and the information within it, simply scan the QR code below.  For those without access to smartphone technology, a traditional printed city guide will also be available alongside the bottles on their display.  The bottle is available now from key international hubs across the Americas, Europe, the Gulf states and Pacific regions.

Macallan - Say a big thank you
The famous Speyside distillery of Macallan is celebrating reaching the 100,000 fan mark on Facebook.  To commemorate the achievement they have recorded a short video featuring distillery workers saying 'thank you' to the Facebook fans.  The video is below - if you want to 'like' Macallan on Facebook and join the 100,000 others (including us), then go to www.facebook.com/themacallan.

Elsewhere, Macallan have also announced the appointment of a new Global Marketing Manager. Jaume Ferràs Santín joins from Bacardi Spain and boasts over 16 years experience in the spirits industry, including a previous stint with the Edrington Group who own Macallan. He will be responsible for developing the overall positioning of Macallan, working with partners from around the world, and driving the creative development of the brand.
posted by Whisky For Everyone at 7:23 PM