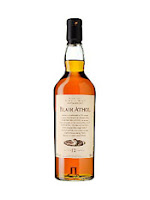 Blair Athol is a distillery in the central Highlands of Scotland.  It is located in the town of Pitlochry and is one of the oldest Scottish distilleries that remain in operation - it was founded in 1798 by John Stewart and Robert Robertson.  The distillery was originally named Aldour after the nearby River Allt-Dour (this translates as 'river of the otter' from Gaelic), before becoming known as Blair Athol in 1825 after an agreement between the then owners and the local Duke of Atholl.

Blair Athol is located next to Blair Castle, which is home to the current 11th Duke of Atholl and is the most visited private residence in the UK. Interestingly, the Duke has his own army called the Atholl Highlanders and they are the last remaining private army in Europe.  The distillery is regarded as 'the spiritual home' of the Bell's blended whisky, which is one of the UK's top sellers.  The whisky produced their has been an important component of the blend since 1933 when Arthur Bell & Sons took over.  This fact is reflected at the distillery which is home to the Bell's Visitor Centre and opened in 1987.

The current owners are Diageo and they continue to use Blair Athol whisky heavily in the Bell's blend.  The current production capacity is 2.5 million litres per year and as a result of demand for blending, only one single malt is consistently released - this 12 years old.  This whisky forms part of a larger range called Flora & Fauna, which showcases some of Diageo's lesser known or closed distilleries, and all are released in relatively small quantities each year.  This Blair Athol 12 years old is bottled at 43% ABV and should cost around the £40 mark from specialist retailers.

Our tasting notes
The colour is golden yellow with a hint of amber and the nose is rich with two obvious initial aromas - orange and malty cereals.  The orange aroma has a zesty edge, while the malty cereal grains hint at a bittersweet character.  Other aromas come through to offer some much needed sweetness, especially some lovely vanilla, honey, caramel and soft dried fruits (think of sultanas, raisins and apple).  There is also a pinch of cinnamon-like spice in there too.

On the palate this feels rich and viscous, and has a slightly oily feeling.  The zesty orange note (think more spiced orange now) and bittersweet malty cereals dominate again initially, perhaps even more so than on the nose.  Both notes contribute to a mouth watering feeling as the whisky grips the taste buds.  Underneath are further sweeter flavours which come through to balance this zesty, bittersweet edge.  These notes include the rich caramel, honey and soft dried fruits from the nose, plus some further fruitiness which has a stewed element to it - imagine stewed apples and pears with a good dose of cinnamon and nutmeg.

The finish is almost the reverse of the nose and palate experiences - it begins sweetly with the dried fruit and caramel prominent, before the spiced zesty orange and malty cereal notes return with a vengeance to give a pleasant dryness towards the end.  This drying quality is heightened by further cinnamon and nutmeg spice, plus a hint of dusty earthiness.

What's the verdict?
We always enjoy sampling whiskies from distilleries that we have never had, or rarely had, anything from.  In the past, we have only ever tried a couple of independent bottlings.  It is always good to try the distillery bottling, as this is essentially what the people that make it think that it should taste like.

The Blair Athol is an interesting single malt, although one which is not particularly complex.  The prominent bittersweet orange and cereal notes were enjoyable to us, but may not be to everyone's taste.  As with anything, it is always worth trying something new and we can now tick another distillery off our ever dwindling list of distilleries that we have not tasted.
posted by Matt C at 10:38 PM

This Blair Athol seems a bit tricky to find... which makes me want it even more. Detailed review, thanks!

I have a bottle of 12 year old Blair Athol.....that I bought in 2000, in Pitlochry. Never opened it. I really desperately need some new friends and a special occasion.

I just bought a bottle in SF. I love Highland scotch and this is definitely different. It took three tastings but I love it. It is softer and gentler than the more traditional Highland Scotch I have tasted. I usually drink Scotch in the winter because of its hardiness. Blair Athol may have now provided me with a "Summer Scotch." It is very pleasing but, because it is so different than what I am accustomed to, it took three tastings. Cheers.

Just bought a few bottles from the Blair Athol distillery in Pitlochry following a tour and tasting. According to the tour guide it's only sold in a regular retail way in just 3 countries. That explains why it is hard to find.
It is different to most single malts I've tried but I liked it.