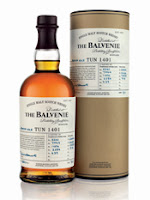 This whisky is the latest to be released in Balvenie's highly acclaimed Tun 1401 series.  The series has won prizes and many plaudits across the globe and Batch #5 was released at the end of June.  This follows Batch #1 from 2010, Batch #2 from mid-2011, Batch #3 from late-2011 which was an exclusive for the USA market and Batch #4 which was released recently as a travel retail exclusive.  Each batch has been created by the legendary  Balvenie Malt Master David Stewart.

The Balvenie distillery is located in the town of Dufftown, which is in the famous Speyside whisky region of Scotland.  It was founded in 1892 by William Grant and is the sister distillery to Glenfiddich, which it is built next to.  Balvenie remains owned by William Grant & Sons today and has a current annual production capacity of 5.6 million litres.  It is regarded as one of the most traditional distilleries in Scotland, as all stages of the whisky making process happen on site in one form or another - this includes growing barley, malting, mashing, fermentation, distillation, coopering and maturation.

The fifth batch of the Tun 1401 has been crafted from nine of the rarest casks that have been maturing at the distillery – four ex-sherry butts distilled in 1970, 1971, 1972, 1975 and five ex-American oak casks from 1966, 1972, 1973, 1974 and 1991.  After selection, David Stewart then mixed these individual casks together in a vessel called a tun. This is a large barrel/cask, traditionally made of oak, where different whiskies are allowed to 'marry together' for some time. In this case, he chose to use the finest tun at Balvenie for this marrying process - Tun Number 1401 - and the marrying process took approximately three months.

As with the previous releases, the Tun 1401 Batch #5 has a limited number of bottles available (we were not able to find the total amount, but only 700 are being released for the UK market).   It has been bottled at the natural cask strength of 50.1% ABV and the recommended retail price is around the £160-165 mark.

Our tasting notes
The colour is a dark golden amber and the nose is instantly rich, fragrant and expressive.  The immediate aromas are of milk chocolate and spiced orange.  Other aromas include plenty of wood spices (imagine cedarwood, nutmeg and cinnamon bark), dark dried fruits (prunes, dates, figs and raisins), vanilla, butterscotch, honey, black coffee and a hint of peach/apricot and earthy ginger.  It is a great smelling whisky.

On the palate this is rich, fruity and packs a little bit of a surprising punch.  There are plenty of initial wood spice and warming citrus notes that penetrate the taste buds and grip hard - think of cinnamon bark, nutmeg and zesty, dried lemons and oranges.  It makes the mouth water and as the saliva mixes, the whisky becomes more velvety and softer.  The spices soften but the zesty orange is exaggerated and becomes almost marmalade-like.  These notes combine superbly with others to create a palate of extreme depth, complexity and enjoyment - imagine honey, butterscotch, dried fruits (raisins and prunes especially), bitter dark chocolate, burnt caramel, toasted caramelised nuts and hints of demerara sugar and coffee.

The finish is long and uplifting with the elements mentioned carry through impressively, particularly the orange, dried fruits, burnt caramel and spices.  The spices seem to come back with a vengeance right at the end and give a warming, slightly tannic dryness to the finish.

This whisky is well balanced as it is presented, but the strength makes you think to add water.  After a few drops the dried fruitiness of the nose is highlighted with the intense wood spices knocked back a little.  The palate still packs plenty of intensity in with the orange note still prominent, along with the burnt caramel and chocolate.  A hint of peach also comes through very well.  The result is equally as good as without water.

What's the verdict?
This is easy - this whisky is very impressive and an absolute cracker.  The balance, depth, complexity and intensity is superb and shows David Stewart's incredible knowledge of selecting and then marrying casks to compliment each other in this way.  The whisky is equally as expressive either with or without water and is truly outstanding.

David Stewart is celebrating his 50th anniversary with William Grant & Sons this year and has chosen a great way to commemorate that acheivement - to release of a whisky of this sublime quality.
posted by Matt C at 7:44 PM