Within Inbox we write a few lines detailing each press release/piece of news/PR event that we have received and provide links, where possible, for you to find out further information.  So what has grabbed our attention this week?  Find out below ...

Ardbeg - Galileo is about to arrive
The award winning Islay distillery has announced the forthcoming release of a new expression.  A new Ardbeg is always one of the most highly anticipated new releases in the 'whisky calendar' and the Galileo (named after the famous astronomer) is no different.  As ever, it is expected to sell out very quickly, with some retailers reporting that their pre-ordered stock has already been allocated to customers.

The whisky used in the Ardbeg Galileo was distilled in 1999 and it was bottled recently at 13 years of age.  The final whisky is a mix of casks, combining first fill ex-bourbon casks with some ex-Marsala casks from Sicily.  It has been bottled at 49% ABV, is non chill-filtered and will retail around the £70 mark.  It should be available from September 1 in the UK, Europe and selected Asian markets.  There will also be plenty of supporting activity for the launch on the Ardbeg website and a special Galileo Facebook page - keep any eye on these for further details.

Benriach - CaskStrength & Carry On
Our fellow London whisky bloggers and good friends Neil and Joel of CaskStrength have announced their second single malt release.  Their aim is to work through the alphabet and release series of whiskies with one distillery from each letter.  Roughly this time last year, they released a very limited Arran and now they have moved on to Benriach for the second bottling.

They have selected a single cask which was distilled at Benriach in 1996 and was initially filled to an ex-bourbon hogshead.  In 2008 it was transferred to an ex-Pedro Ximenez sherry cask and it has spent the last four year maturing in that.  There are just 296 bottles and it has been bottled at the natural cask strength of 55.2% ABV.  The bottling is being sold via online retailer Master of Malt for a price of £54.95.  Rumour has it that it is selling fast, so if you fancy a bottle then don't hang around - click here to buy. 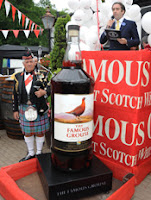 Famous Grouse - Record breakers
The popular blended whisky has broken the world record for the largest bottle of whisky.   The 228 litre bottle of The Famous Grouse was filled in front of Guinness World Record adjudicator Jack Brockbank and an assembled crowd of VIPs and fans at The Famous Grouse Experience on 12 August.  The Experience is located at the Glenturret distillery in the Highlands and has been celebrating its 10th anniversary this year.

The record beats that previously held by Jack Daniels of 184 litres.  The Famous Grouse record breaking bottle holds a staggering 9,120 pub measures of whisky and took three hours to fill.  The hand blown bottle (pictured, above) was made by Czech glass manufacturer Bomma and stands an impressive 1.75 metres tall.  The bottle will stay at the distillery and be on permanent display to those visiting The Famous Grouse Experience.

posted by Whisky For Everyone at 7:08 PM