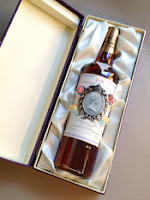 A couple of months ago, we reported that the famous Macallan distillery had continued with its tradition of honouring Royal occasions with a special limited edition Diamond Jubilee single malt release. At the time of release, the whisky was only available from the Macallan Visitor Centre at the distillery or via www.themacallan.com. Now some of the remaining bottles are being released to selected whisky retailers in the UK.

Macallan is one of the most well known names in the Scotch whisky industry and their single malts have many fans around the world.  The distillery was founded in 1824 by Alexander Reid and was originally called the Elchies distillery.  It did not become known as Macallan until 1892 and is located in the heart of the Speyside region of Scotland, close to the village of Craigellachie and overlooking the River Spey.  Macallan is currently owned by the Edrington Group and is one of the largest distilleries in Scotland with an annual production capacity of eight million litres.

The Diamond Jubilee Edition is bottled at 52% ABV (to commemorate 1952, the year of the Queen's accension to the throne) and there are just 2,012 bottles. It has been produced using a marriage of ex-sherry casks which were hand selected by Macallan's Head Whisky Maker Bob Dalgarno.  The whisky is presented in a bespoke purple package, which has been designed by art director David Holmes. It includes a ceramic brooch showing a retro design of the Queen's head, which was designed by Arnold Machin, which was later used on postage stamps by the Royal Mail. Each bottle will cost £350.

Our tasting notes
The colour is a dark golden amber and the nose is packed with rich, sweet aromas - caramel, butterscotch, dark brown sugar, dried fruits (especially raisins, sultanas and candied orange peel), malted cereals, plus whiffs of vanilla and dark chocolate. It is a very promising start and one that makes you want to take a sip.

On the palate this immediately feels a bit prickly due to the high(ish) alcohol strength.  Once the taste buds get used to that feeling, the 'prickle' subsides and the characteristics begin to reveal themselves in layers.  First come some lovely notes of butterscotch, vanilla and chocolate, which are followed by some dark dried fruits (the raisins and sultanas again) and toasted almonds, plus an increasingly prominent note of candied orange peel/zest.  As things progress the sweeter notes begin to be taken over by some drier and spicier elements, which create a good balance.  These elements include notes of coffee granules, bittersweet cereals and wood spices, like cinnamon and nutmeg.

The finish is long, warm and intense with the lovely balance of sweet and spicy notes that combined so well on the palate, particularly the butterscotch, chocolate, cereals and zesty oranges.  A dash of water livens up this whisky even more - the 'prickle' of the nose and early palate is dampened and the orange and coffee notes are heightened and come to the fore.

What's the verdict?
This is exceptionally good stuff.  The expertise and sympathetic use of the ex-sherry casks are evident and the whisky has a wonderful depth and complexity.  It is a whisky that is great taken neat, but it really comes alive when a few drops of water is added.  There is a lovely juiciness that develops and this only adds to the complexity.

There seems to have been numerous Diamond Jubilee whisky releases in the last few months, but this has to be the best to date. The price tag (£350) is higher than most of the other releases and may put many off purchasing this.  However, we would urge anyone that has that sort of money to get a bottle of this, especially if you enjoy your whiskies on the richer and sweeter side.
posted by Matt C at 7:46 PM

How much would you place on the value of a bottle in 20 years time, obviously we,d have a new king by then?????

Any idea on which retailers may have this?