Within Inbox we aim to write a few lines detailing each press release/piece of news/PR event that we have received and provide links, where possible, for you to find out further information.  The whisky companies and PR agencies are slowly waking from their festive slumber, so here we go ... 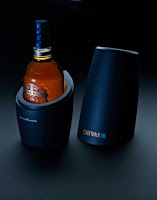 Chivas Regal - Designer packaging
The premium blended Scotch whisky brand has launched a limited edition range of packaging for its 18 years old expression, which has been created in collaboration with iconic Italian design house Pininfarina. The design sees the bottle sporting a special label and this is housed in a sleek metal outer casing which is covered in a metallic blue veneer (pictured, left).  It is expected to retail for £90 a bottle.

A second larger limited edition will accompany the above - this will again house the special bottle of Chivas Regal 18 years old along with two bespoke whisky glasses, the shape of which is inspired by the shape of aerodynamic design of the outer casing.  This is expected to retail for £360.  Both limited edition packages will be available shortly in selected markets around the world, including China, Russia, the UK and the USA, plus within the travel retail sector.

The Glen Scotia distillery, which is based in Campbeltown, has expanded its single malt range and introduced a new set of packaging. The distillery's owners, Loch Lomond Distillery Co, employed design agency Brand Britain and the new colourful designs included images by Scottish photographer Duncan Wood.

The new packaging is designed to give Glen Scotia a more premium feel and help expand the brand worldwide. The new range features five expressions with age statements of 10, 12, 15, 18 and 21 years old.  Each bottle and presentation carton carries the same image but in a different colour.

Andrew Gray of Brand Britain comments, "The single malt sector is crowded with many brands; we had to produce something different and eye catching just to be noticed. We are confident the new packaging, with the Highland cow and northern light skies as positive images of Scotland, will allow us to introduce Glen Scotia's exceptional whisky to a wider audience now around the world."

Wemyss - Plans to open a distillery


The Wemyss family have announced plans to produce their own whisky at a new Scottish distillery.  The Kingsbarns distillery is to be located in Fife close to Wemyss Castle, the Wemyss family home since the 1300s, and the famous St. Andrew's golf course.  The family have historical links to the whisky industry, including John Haig (of Haig's fame) building his first distillery on Wemyss land and Wemyss Malts, the artisan independent bottling company which was founded in 2005.

The new distillery will include the renovation of buildings at East Newhall Farm (pictured, above) to house production facilities and a visitor centre. The project sees Wemyss investing a substantial sum, in addition to a grant from the Scottish Government.  The construction is to start soon with works completed by mid 2014.

William Wemyss, the founder of Wemyss Malts, commented “This rare opportunity to distil our own single malt whisky and develop a new Scotch whisky brand to support our existing business as an independent bottler.  This will secure the family interest in Scotch for the next generation. We are delighted to bring a new distillery and visitor centre to the East Fife area.”

posted by Whisky For Everyone at 7:13 AM