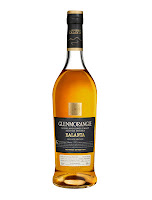 Glenmorangie is one of the most well known and respected names in the world of whisky.  The distillery was officially founded in 1843 when William Matheson applied for a license for a small farm distillery on the current site.  The original named was Morangie and illegal distillation on the site can be tracked back to the early 1700s.  It is located on the edge of the north Highland town of Tain and took its current name in 1887 when the Glenmorangie Distillery Company Ltd was formed.  It is also one of the few distilleries to use hard water during production, taking its water from the local Tarlogie Spring.

Glenmorangie is now one of Scotland's largest single malt distilleries with 10 stills and an annual production capacity of six million litres.  Their copper pot stills are the tallest of their type in Scotland and stand over five metres (16.5 feet) tall. The high capacity enables Glenmorangie to maintain a decently sized core range, including the Original (one of the biggest selling single malts in the world), while also experimenting with different expressions and wood types such as in this Private Edition series.  It is currently owned by Moet Hennessey, who purchased Glenmorangie in 2004.

Our tasting notes
The colour is a vibrant golden yellow and the nose has an immediate hit of tangy orange zest, backed up by some lovely aromas of honey and vanilla.  Then comes plenty of intense wood spice and underneath are further aromas tropical fruit (think of papaya especially), freshly sawn wood, dessicated coconut and a hint of waxy furniture polish.

On the palate this feels viscous, creamy, luscious and classy with an early prominent note of burnt caramel giving way to delicious juicy notes of dried tropical fruit (that papaya again) and the tangy orange zest.  These mix well with notes of sweet honey, vanilla, coconut and a hint of malted barley sugar.  The layers of flavour keep on building as some late drying and warming wood spices begin to come through - think of cinnamon, nutmeg and a hint of cardamom - along with a sweet hit of Muscovado sugar and caramel.  There are also hints of toasted almond and white chocolate.

The finish is very long and combines lovely honey and tropical fruit sweetness with dry, warming wood spices.  This length adds to the class and depth shown on the nose and palate, and makes it very drinkable.

What's the verdict?
Glenmorangie have set the cat amongst the pigeons with Ealanta.  They have released an early contender for our 'Whisky of the Year' for 2013.  We look forward to seeing how other new whiskies attempt to compete with this.  This whisky comes across as decadent and lends itself more to special occasions, rather than everyday drinking.  The superlatives for this whisky are almost endless - classy, intelligent, delicious, aromatic, clean, complex, flavoursome, luxurious ...