Normally we choose not to report on the numerous whisky awards ceremonies around the world - it is increasingly difficult to keep up with the explosion of such awards and this makes it difficult to select which awards hold more gravitas. However, this award is unique in celebrating Canadian whiskies and those working in the industry.  We admit that our knowledge of this subject is at the fledgling stage and given the current growth in popularity of Canadian whisky, it feels important to us.

The Canadian Whisky Awards are the brainchild of Davin de Kergommeaux - the world authority on Canadian whisky and writer of the definitive website canadianwhisky.org. His goal is to raise awareness about the fine whiskies coming out of the country and bring further information to a wider audience. This goal is reinforced by the recent release of his new must-read book Canadian Whisky : The Portable Expert.

Davin was head of the judging panel, which included some of Canada and North America's best known whisky writers, bloggers and broadcasters. The panel comprised of Davin himself, plus Chip Dykstra of Rum Howler, Jason Debly of Jason's Scotch Whisky Reviews, Mark Gillespie of WhiskyCast, André Girard of QuebecWhisky, Lawrence Graham founder of the Victoria Whisky Festival, Johanne MacInnis AKA @WhiskyLassie and whisky fan Kris Shoemaker. 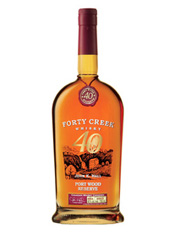 During the awards, numerous prizes were given out including 14 Gold Medals, 14 Silver Medals and 23 Bronze Medals - the full list of the winning whiskies can be found on canadianwhisky.org.  Within these were a selection of category winners, but the ultimate prize of Canadian Whisky of the Year 2012 went to the Forty Creek Port Wood Reserve (pictured, above).  The Forty Creek distillery is located in Grimsby, Ontario and was founded by former winemaker John K. Hall in 1992.  Since then Forty Creek has won over 40 major awards in competitions around the world and John has established himself as a Canadian whisky industry legend and evangelist.  The Port Wood Reserve in only available in Canada and the USA currently.

We have never tried any whiskies from Forty Creek, but we hope to in the near future to help further our education about Canadian whisky.  Further information can be found about Forty Creek and John K. Hall on their informative website fortycreekwhisky.com.  There is also coverage of the Victoria Whisky Festival, including interviews with Davin de Kergommeaux and John K. Hall, on the latest episode of Whisky Cast (Episode #407).

posted by Whisky For Everyone at 1:23 PM