Drammie Awards 2013 - Winners announced
A number of weeks ago we told you about the annual Drammie Awards.  These are run by the guys at For Whisky Lovers and the process involves whisky fans nominating, and then voting for their favourite whiskies and whisky related subjects.  Earlier this week, the winners of the 15 categories were announced and we were delighted to discover that we have been voted as the winners of the 'Best Whiskey Information Source' category. 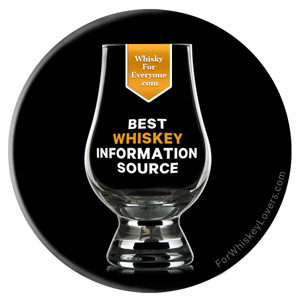 This award was the first one that we have been nominated for and we were not expecting to win, especially given the calibre of the competition in the category - CaskStrength, WhiskyCast, WhiskyFun and The Whisky Wire.  We would like to say a huge thank you to anyone who nominated and voted for us.  This award means all the more to us as it is whisky fans and readers that get to vote, rather than industry experts as happens in many awards.  To view the full list of winners - click here. 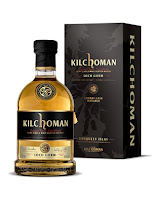 Kilchoman - New expression
Islay's newest distillery has announced its latest limited edition single malt release - the Kilchoman Loch Gorm.  The new bottling is named after the loch which is located close to the distillery and is known for its dark, peaty waters.  At five years of age, it will be the oldest single malt from Kilchoman to date.

Loch Gorm will also be the only one to date which has been wholly matured in ex-Oloroso sherry casks (a combination of hogsheads and butts).  This initial release will see 10,000 bottles hit the market worldwide and further batches will appear when stocks reach the correct maturation times and criteria.  Loch Gorm is bottled at 46% ABV and has a recommended retail price of £56 - it will be available shortly through specialist retailers.

Laphroaig - Travel Retail exclusive
More news from Islay - the iconic distillery of Laphroaig have announced the second release in a series of three whiskies which are exclusive to the travel retail sector called the QA Cask. This follows on from the PX Cask, which was part matured in ex-Pedro Ximinez sherry casks and was released some months ago.  This new whisky has been matured in a combination of ex-bourbon cask and un-charred American oak barrels, which are then married together.

The 'QA' in the name refers to Quercus Alba, the Latin name for American oak.  It is bottled at 40% ABV and will be available initially in the UK and selected European airports.  The retail price is €55/£47 a bottle.  The trilogy will be completed by Laphroaig An Cuan Mor later in the year. 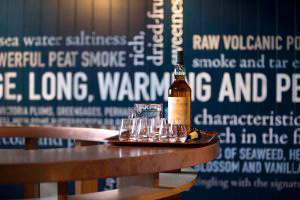 The Talisker distillery on the isle of Skye has opened the doors of its new revamped visitor centre.  The distillery, which is Diageo's most visited despite being in a remote island location, has undergone a £1 million redevelopment and expansion so as to cope with an expected 20% increase in visitor numbers over the coming Summer.  Last year, almost 60,000 whisky fans visited Talisker.

The investment has seen the creation of a new visitors welcome area, a new viewing gallery in one of the warehouses and new tasting rooms (one of which is pictured, above) where visitors can sample Talisker in surroundings reflecting the distillery's heritage and provenance.

posted by Whisky For Everyone at 8:34 PM