Within Inbox we aim to write a few lines detailing each press release/piece of news/PR event that we have received and provide links, where possible, for you to find out further information.  Here is the news that has attracted our attention this week - there's a bit to get through, so let's get cracking ...

Distillery ownership changes always seem to be the biggest news and this week has seen another one with Burn Stewart being acquired by Distell, South Africa's largest wine and spirits company.  In a deal rumoured to have been worth £160 million, Distell will take control of the Bunnahabhain, Deanston and Tobermory distilleries and single malt portfolios plus the Black Bottle and Scottish Leader blended whisky brands and related facilities.  It is hoped that the acquisition will allow Distell to make inroads in to the developing markets where Burn Stewart products perform strongly, such as south east Asia, Taiwan and eastern Europe.

Distell's Managing Director Jan Scannell says, “Our acquisition of Burn Stewart is a very significant development for Distell from a strategic perspective but also given the rich and proud history and heritage of the brands involved - Bunnahabhain is the flagship single malt and is made on Islay, considered one of the most prestigious whisky locations by connoisseurs. Tobermory is the only distillery on the isle of Mull and one of the most popular tourist spots in Scotland.  The home of Scottish Leader is the Deanston distillery situated in the Highlands, close to both Edinburgh and Glasgow."

Glengoyne - Welcome to the 'Family'
The Highland single malt has announced its new online members loyalty program - the Glengoyne Family.  When joining the Family, you will be in the company of like-minded Glengoyne fans and benefit from exclusive offers and promotions, a regular e-newsletter, early notice of new releases and the opportunity to be on a cask selection panel.

The launch coincides with the 10th anniversary of the ownership by Ian MacLeod Distillers, and follows the re-branding of their single malt range and a new website.  To celebrate the launch, the distillery are offering new members the chance to win a decanter of the rare Glengoyne 35 years old (pictured) which is not officially released until June - to sign up to the Glengoyne Family, visit www.glengoyne.com.


Label 5 - Hits NYC
The popular Scotch blended brand of Label 5 has launched a new web series which will be broadcast on their Facebook page. Entitled WorldmiXperience, the series features five competition winners from around the world (two from Australia, two from Belgium and one from Lebanon) who will undertake five challenges over five days around New York City.  The aim is to spread the word about the brand.  Go across to www.facebook.com/label5 to watch their progress - this will also be updated regularly throughout the challenges with photos, interviews, videos and competitions for you to enter.  Here's a little teaser ...

Macallan- Skyfall bottle auctioned
A bottle of whisky which featured in Skyfall, the latest James Bond movie, has been auctioned to raise money for charity.  The Macallan 1962 is from the Speyside distillery's Fine & Rare Collection and featured in key scenes of the movie, which is the highest grossing Bond film of all time.

The 1962 was chosen as it was the year that Dr. No, the first Bond movie, was released and to celebrate 50 years of the franchise.  The bottle is signed by cast members Daniel Craig, Javier Bardem and Bérénice Marlohe.  The bottle was sold at Sotherby's in London for £9,635, with all proceeds going to charities supporting the British security and intelligence services.

The increasing popular Old Pulteney brand, which is made in the north Highlands, has announced the release of a new range of single malts that are to be exclusive to the travel retail sector.  The Old Pulteney Lighthouse Series consists of three whiskies and will be available in Singapore from next month, with a worldwide release scheduled for the Summer. 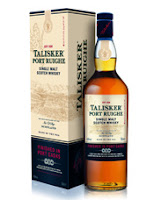 Talisker - Two pieces of news
The iconic distillery on the isle of Skye has had another busy week and released two bits of news.  The first is the release of a new expression to the core range - Talisker Port Ruighe.  This whisky is named after the town and port on the isle of Skye and has been matured in a combination of ex-bourbon and ex-sherry casks, before then being finished in ex-Port wine casks.  It is bottled at 45.8% ABV and is available very shortly from specialist whisky retailers for £55-60 a bottle.

The second piece of news calls on whisky lovers to battle against the elements in the world’s first interactive 'Storm'. A 25ft (7.5 metre) high installation has been created to bring the tempestuous weather of the distillery’s home on Skye to The City of London. Combining wind, rain, lightning, fog and thunder, those taking part will have an experience they will never forget. There are also prizes on offer, plus tasting of the new Talisker Storm. The installation is open to all on Wednesday 24 April between 6­‐9pm at The Design Museum, London.  It will then move on to Munich and Milan.

posted by Whisky For Everyone at 7:12 PM