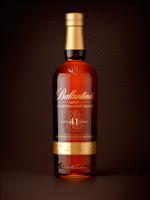 Ballantine's - Championship Blend
The premium blended Scotch has announced a highly limited release of Ballantine's which has been created to celebrate the brand's continued sponsorship of the Ballantine's Championship golf tournament.  This is held annually in south east Asia and is this year taking place at Icheon in South Korea between 25-28 April.

The Championship Blend 2013 has been created using some very rare whiskies, with the youngest being 41 years old.  It has been blended by Sandy Hyslop, the Ballantine's Master Blender, and golfer Bernd Wiesberger, the winner of last year's tournament.  There are only 10 bottles that have been made - one will be presented to Wiesberger as reigning champion, with another going to the winner of this year's Championship.  The other bottles will be shared between an auction held during the tournament, with the money raised going to charitable causes, and the Ballantine's archive. 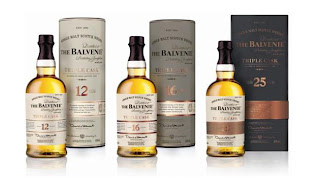 The popular Speyside distillery of Balvenie has announced the release of a new series of whiskies which will be exclusively available through the travel retail market - the Triple Cask Collection.  In what is shaping up to be a busy year for the brand, the news follows hot on the heels of the recently released 12 years old Single Barrel.  The launch event took place earlier this week and was hosted by Balvenie's legendary Malt Master David Stewart and the brand's Global Ambassador Sam Simmons.

As the name suggests, each of the whiskies in the new range have been matured in three types of cask - first fill ex-bourbon, refill ex-bourbon and ex-sherry.  All have been married together and created by David Stewart, and are bottled at 40% ABV.  There are three age statements at 12, 16 and 25 years old and these will be priced at £49.99, £65.99 and £299 respectively.  They will be initially exclusive to the World Duty Free Group.


Diageo - Expansion plans and other news 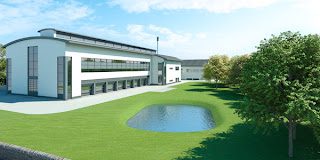 Diageo, the biggest player in the Scotch whisky industry, have announced plans for their 29th single malt distillery and a series of expansion plans for some of its existing distilleries.  The new facility will be built next to their Teaninich distillery in the Highland town of Alness and will create 20 new jobs.  It is as yet unnamed and will contain 16 copper pot stills producing a staggering 13 million litres of spirit per year.  It will include an on-site bio energy plant, which will convert waste materials in to power to operate the distillery.  The total cost is an estimated £50 million.  Further to this, Teaninich will also see its capacity doubled in size at a cost of £12 million.

Elsewhere other plans have been announced, which are subject to planning application approval from the Highland Council.  These include extensive work at the Glendullan and Mortlach distilleries in the Speyside town of Dufftown.  Glendullan will get an on-site bio energy plant, while Mortlach will be expanded to double its current production capacity.  The total estimated cost for this Speyside work is £30 million.

Glenlivet - Alpha revealed
The latest single malt from the famous Glenlivet distillery in Speyside is one of the most mysterious new releases of the year to date. It is mysterious because very little is known about it and details will be revealed over the coming weeks.  As a result, the Alpha is packaged in a black bottle and carries no tasting notes or cask maturation details.  Essentially, Glenlivet are asking consumers to take a 'step into the unknown' and be part of an innovative journey.

There are just 3350 bottles of this whisky and it will retail at £99.99 a bottle. In addition, to help unlock the mystery of Alpha there will be a series of 'sensory challenges' operating on the Glenlivet Facebook page.  Glenlivet Alpha is currently available to pre-order through The Whisky Shop, the UK's largest high street specialist whisky retailer, who have the initial batch of stock - click here to buy.

posted by Whisky For Everyone at 7:01 AM


Sports Nutrition
Hi There, I just spent a little time reading through your posts, which I found entirely by mistake whilst researching one of my projects.