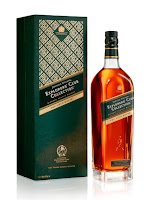 The Johnnie Walker The Gold Route is the the latest release in the Trade Routes series from the world's leading whisky brand.  It is the second in the series and follows on from The Spice Road, which appeared back in November 2012. This is available exclusively in the Duty Free/travel retail sector and aims to pay tribute to the pioneering traveling heritage of the John Walker and his company.  The Trade Routes series is part of a larger series named the Explorers' Club Collection, with further releases to be announced during 2013.

The brand is named after John Walker, a man who owned a small grocery shop in the Scottish town of Kilmarnock in the 1820s. In those days most whisky sold commercially was a blend. John Walker (or Johnnie to his friends) learnt the skills required to create a commercially successful whisky and the rest is history. The success of the brand took off during Victorian times when it was heavily exported around the expanding British Empire. The Johnnie Walker brand and its famous walking man logo are now embedded in world culture and it is currently owned by multi national drinks company Diageo.

The Gold Route takes particularly inspiration from a group of journeys made by the Walker's agents that took them from a starting point in Central America, through the Andes and along the Pacific Ocean coast to the foot of the South American continent. The whisky has been created by Diageo's Johnnie Walker blending team headed by Jim Beveridge and is constructed using a variety of ages of whisky, including some very old casks.  It is bottled at 40% ABV, has a recommended retail price of £65 ($95 US) and is available now.

Our tasting notes
The colour is golden yellow with a tint of amber and the nose immediately offers an interesting mix of sweet, savoury and smoky aromas.  It is difficult to say which of these elements appear first.  There is plenty of brown sugar-like sweetness that is reminiscent of butterscotch sauce or toffee, some dried fruits (think of raisin and sultana), a distinct hit of bitter orange and a decent level of savoury, earthy peat smoke.  A hint of ginger is also present.

On the palate, this is initially soft and gentle with notes of creamy cereal grains and coconut combining with the butterscotch/toffee elements from the nose.  Sugary dried fruits (think of raisins and sultanas again, along with some candied orange peel) enhance the sweetness, and just before the whisky threatens to get too sweet some balancing notes begin to appear - crisp fresh green apples, earthy ginger (possibly ginseng?), oaky wood spices (imagine baking spice, cinnamon, nutmeg and a hint of star anise) and some warming peat smoke which never seems to be far away.  This smoke is a bit feistier and more spiky than on the nose and has a peppery/chilli edge.

The finish again begins sweetly with the sugary butterscotch and dried fruit notes to the fore.  The drier, woodier and spicier notes then kick in (especially the baking spice), along with the peppery peat smoke.  These soften towards the lingering end.

When water is added, the nose remains relatively similar but it is the palate where the main differences are felt.  The whisky becomes softer, juicier and more fruity (the green, crisp fruit in particular) and the drying wood spices and peppery smoke are dampened.  It seems a little more rounded.

What's the verdict?
This is another good offering from the Johnnie Walker stable and is a pleasant drinker.  It will be interesting to see how they complete the trilogy - The Spice Road gave us bold, expressive and youthfully brash characteristics and The Gold Route has given more subtlety, more savoury notes and more smokiness.  This whisky is good but on reflection we would probably choose The Spice Road above it, especially as it is half the price and of seemingly similar quality and balance.