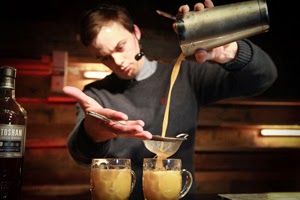 The Lowland single malt brand has announced the winner of the latest Auchentoshan Switch event, the finals of which were held in London earlier this week.  The competition sees bartenders and mixologists from both sides of the Atlantic 'switching' jobs and working in a bar on the opposite side of the ocean.  This year's winner is Aidan Bowie (pictured, above), who works at The Blytheswood Square Hotel and he beat five other finalists from around Europe.

The finalists were put through their paces with a series of cocktail challenges using the Three Wood expression of Auchentoshan.  Bowie will fly over to New York next year for a two week placement at the prestigious Dead Rabbit bar.  The American final is taking place shortly and the winner of that will 'switch' and work at Nightjar near Old Street in London for the same period.

Auchentoshan have also announced the latest of their Taste Experiments - this will be happening in Glasgow on 8 October at the Corinthian Club, starting at 6.30pm.  Tickets are £10 each and can be ordered through www.eventbrite.com. The hugely popular Famous Grouse blended whisky has announced the first stage of an innovative new scheme to raise awareness of the brand and engage consumers in ways like never before.  The Famous Collaboration (tagline - Be Part of Something Famous) kicked off with the unveiling on an interactive sculpture in London this week.  The sculpture is a collaboration between the brand, designers Studio Roso, Marshmallow Laser Feast and lighting designer Ruairi Glynn.

It stands 5 metres high and consists of 62 coppers strips, inspired by the hoops that hold whisky casks together, which form a huge spiral.  Each strip has words and expressions cut out using some of the finest laser cutting equipment.  These are from Famous Grouse fans who contributed to a competition back in August, when it was asked why you would like to be famous.  Just 1,542 were selected and each has been laser cut in the contributors language.  A light moves through the sculpture projecting the words on to surrounding surfaces.

The scheme will continue with further projects planned over the next few years.  To find out more information about The Famous Collaboration and the future ideas, please visit www.somethingfamous.com.

Girvan - New range of single grains
William Grant & Sons, the owners of the Girvan grain distillery, has announced a new range of single grain whiskies that will bear the distillery's name.  The Girvan Patent Still range has been launched in London with a 25 years old expression, which will appear as a UK exclusive in specialist retailer in November.  It is the company's first ever single grain whisky release and marks the 50th anniversary of the innovative column still being installed at Girvan in 1963.

The 25 years old is bottled at 42% ABV and will retail for a price around the £250 mark.  The packaging also shows a departure for the company, which owns the Glenfiddich and Balvenie distilleries amongst other brands, as it is presented in a tall elegant bottle which sits in a 'picture frame' style box.  It will be joined in 2014 by two further expressions - the no age statement 5974 and the 30 years old.  Further details and prices of these will be announced closer to the launch. 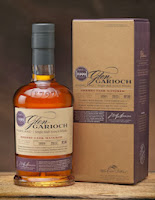 Glen Garioch - Vintage whisky released
Scotland's most easterly distillery has announced the latest addition to its small batch vintage range - the Glen Garioch 1999 Vintage. This new expression is the first whisky from the distillery to have been fully matured in ex-Oloroso sherry casks.  There will be just 6,000 bottles and these are released at the natural cask strength of 56.3% ABV and it is un-chill filtered.  The 1999 Vintage is available shortly through specialist whisky retailers and has a recommended retail price of £59.99. 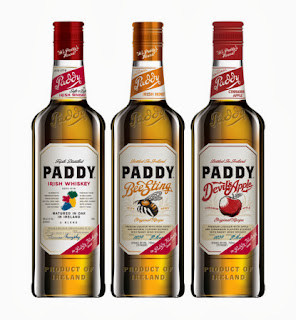 Irish Distillers Pernod Ricard have announced a revamp of its popular Irish whiskey brand of Paddy.  The regular bottling has seen the bottle and label redesigned, and this has been joined by two flavoured expressions of the whiskey.  This signals the company's first foray in to this ever expanding sector.  The two new products are named Bee Sting and Devil's Apple and are flavoured with honey and apple respectively.

They will initially be launched in France and the USA (they will be called Irish Honey and Spiced Apple in France), with further markets coming on line in 2014.  Other flavours will join the range and will be tailored to the market they are launched in to.  Further information can be found at the new website - www.paddywhiskey.com.

Brendan Buckley, Global Innovation and Category Development Director for IDPR, says: “It’s a very exciting time as Paddy is our first entry into the flavoured whiskey segment.  With flavoured whiskey standing at more than three million cases annually and growing strongly, there is a real opportunity for us to offer something a little different that will appeal to people who already enjoy flavoured whiskey, and also recruit new consumers to the category.

posted by Whisky For Everyone at 10:37 PM