Compass Box - 10 out of 10
Our good friends at Compass Box, the artisan whisky blending company have celebrated the 10th birthday of one of their most popular creations with a special bottling.  The Peat Monster 10th Anniversary is a limited edition release to mark 10 years since the award winning blend (then simply known as The Monster) was launched.  There are just 5,970 bottles available.

The limited edition is made using a combination of Highland, Island and Islay whiskies, with some older casks of peaty Highland malt used to add extra richness, depth and complexity.  It has been bottled at a slightly higher strength of 48.9% ABV and features a bespoke label created by US artist Mark Burckhardt.  A bottle will cost £83 from the Compass Box website or through specialist whisky retailers. 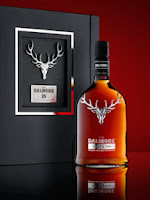 Dalmore - 25 years added
The north Highland distillery of Dalmore have announced a new release in to their core range - the Dalmore 25 years old.  The whisky has been created by Dalmore's Master Distiller Richard Paterson and has undergone an extraordinary sequence of maturation - it has initially been in American oak casks before being split in to ex-palomino Fino sherry butts and first-fill ex-bourbon casks, then married in ex-bourbon barrels before finally being transferred to ex-Tawny Port pipes.

The Dalmore 25 years old is bottled at 42% ABV and has a recommended retail price of £600.  There will be just 3,000 bottles released each year going forwards.  It will be available in most global markets from the end of October, and in North America from early 2014.

Walsh Whiskey - New distillery announced
The company behind The Irishman and Writer's Tears brands have announced plans to build a new craft distillery at a cost of €25 million.  The distillery will be located near the town of Carlow, which is to the south west of Dublin.  The aim is to grow the brands and increase the number of whiskies in each range, with particular emphasis on emerging markets such as China and India.

The Walsh Whiskey Distillery is expected to be operational by 2016 and will include a visitor centre and warehousing facilities.  The project has financial backing from Illva Saronno Holdings, the Italian drinks company that owns the Disaronno brand, and is set to create over 50 new jobs in the Carlow area over the next five years.

posted by Whisky For Everyone at 7:06 PM

eToro is the best forex trading platform for rookie and pro traders.