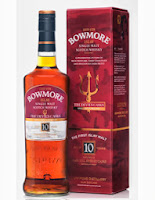 The Devil's Casks is the new limited edition single malt release from Bowmore, the oldest distillery on the famous whisky island of Islay. The whisky is so named as it is believed in local legend that the devil once hid in a cask of Bowmore so as to hide from angry residents and escape to the mainland. We are not so sure about that story, but it is said that the circular church in the village of Bowmore (pictured, below) was so shaped to prevent the devil having any corners to hide in.

Bowmore is one of the oldest distilleries in all of Scotland that is still in operation, having been founded in 1779 by John Simpson. It is owned by Morrison Bowmore, who have been in control since 1963. They are a subsidiary of the larger Suntory drinks company from Japan, who acquired Morrison Bowmore in 1989. The annual production of the distillery is two million litres. The core range is extensive and expands across local and travel retail markets - this helps to make Bowmore one of the biggest selling single malts in the smoky/peaty style.


Bowmore The Devil's Casks is limited to just 6,000 bottles, of which only 540 bottles are destined for the UK market. The whisky has been maturing for 10 years in first fill ex-sherry casks, which is an unusual practice for Bowmore. Other markets around the world will get similar allocations. The price is very reasonably at £50.99 and will be available through specialist retailers.  It is bottled at the natural cask strength of 56.9% ABV.

Our tasting notes
The colour is a deep bronze amber and the nose packs a punch.  The initial mix of aromas combines robust peat smoke with some dark dried fruits (think of raisins especially) and caramel.  The peat smoke has a medicinal and slightly acrid edge to it which catches in the nostrils. Underneath are further notes of toasted nuts, toffee apples and ginger.  It is very promising indeed.

On the palate the whisky feels viscous and coats the taste buds.  The peat smoke comes to the fore and retains the iodine-like medicinal and slightly acrid notes detected on the nose.  This smokiness makes it initially quite drying, however it is not long before some sweeter notes appear to add balance.  This comes in the form of caramel and brown sugar, along with intense notes of dried fruit (imagine raisins and candied orange peel) and hints of green apple and treacle.  There are also plenty of toasted nuts (maybe caramelised nuts?) and woody spice present, especially cinnamon and a hint of star anise.  It is deep, dark and intense stuff.

The finish is long and again combines the fruity, sweet and smoky elements well.  It is the peat smoke which lasts longest and leaves a lovely drying quality in the mouth.  The delicious caramel and dried fruit notes fade slowly, as does a slightly earthy spiciness.

The addition water brings out the fruitiness in the whisky, especially the bitter orange/candied peel note.  The caramel becomes a little more fudge-like and less in tense, whereas the smokiness loses a bit of its acrid edge and seems to have an earthy element that was not present before.

What's the verdict?
Bowmore have done very well with The Devil's Casks - it is a superb whisky and one that combines some lovely elements together.  The fruitiness, sweetness and smokiness are well balanced.  It may be a powerful whisky with a high ABV but it doesn't feel like one.  The addition of water softens everything and it remains very nice, but we like the intensity of it at full strength.

On paper this seems like a good bargain at just over £50 for a first-fill ex-sherry cask matured whisky at cask strength.  This quality of the liquid makes this seem even more so.  Here lies the problem - the combination of the good price and some clever marketing by Morrison Bowmore has created a huge demand for this product.  Most retailers are have already sold out their allocations, so good luck if you fancy getting one ...

Looks like a beast! Can´t wait to try it if i get a hand on a bottle.

We are lucky enough to have claimed a bottle via a helpful and amazing whisky expert (Elliot Fishbein of Town Wine and Spirits in Rumford, RI, USA) who highly recommended it. As a whisky neophyte it is the most expensive drink I have ever bought, but it is a revelation!

eToro is the #1 forex trading platform for new and advanced traders.