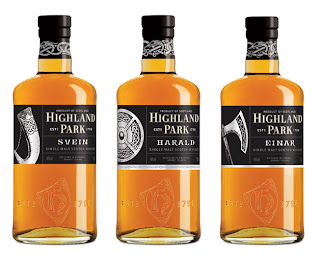 Earlier this year, we wrote about the Warriors Series from the multi award-winning highland Park distillery.  The series consists of six single malts, which are all named after figures from Nordic history, and three were launched back in February - Svein, Harald and Einar (pictured, above).  The final three whiskies, named Sigurd, Ragnvald and Thorfinn, have now been released and sees the full set together for the first time.  The Warriors Series is exclusive to the travel retail sector.

Highland Park is the most northern whisky distillery in Scotland. It is located on the Orkney islands, close to the capital of Kirkwall.  It is one of only two distilleries on the islands (Scapa being the other). Highland Park is also one of the oldest whisky distilleries in Scotland and was established in 1798 by Magnus Eunson.  It is currently owned by the Edrington Group and has an annual production capacity of 2.5 million litres. Highland Park has grown rapidly to become one of the best selling single malt whisky ranges in the world.

The Warriors Series pulls on the strong Nordic heritage and history of the Orkney islands.  The Highland Park distillery has been successfully tapping in to this heritage for a number of years now, including for the ongoing Valhalla Collection and a separate travel retail range.  The character named on each expression of the Warriors Series had historic connections with the Orkneys, and each is depicted on their respective bottlings by a characteristic icon.

The Warriors Series carry no age statements or vintages, but contain older component whiskies as you progress through the range. This is reflected in the prices, which start at €40 for Svein and finish at €1,000 for Thorfinn. The range begins with a heavy influence of ex-American oak casks at the lower price range, and this changes to include higher percentages of ex-European and Spanish oak casks as you progress through the series.

For more information on the series and our tasting notes of Svein, Harald and Einar - click here to read our original blog post. 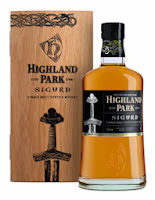 Highland Park Sigurd
This whisky is named after one of the most feared Viking earls that features in the Orkneyinga Saga.  Sigurd is depicted by a sword - this is because Sigurd was given fragments of his father's sword when he was born.  His father was killed in battle and he gave the shattered sword to his pregnant wife as he was dying to give to their unborn son. Sigurd is bottled at 43% ABV and has a retail price of €150.

The colour is golden with a hint of amber and the nose has immediate aromas of toffee, dried grass and gentle earthy smokiness.  There are also hints of dried tropical fruits, ginger and candied orange peel.  On the palate, this has a rich and viscous feel.  It is initially quite woody and spicy but this soon softens to reveal a lovely combination of notes - ginger cake, golden syrup, toffee, dried mango, cinnamon, spiced citrus peel, caramelised nuts and a hints of star anise and ginseng.  The soft and gentle smoke is never far away and has a floral edge to it.  The finish is long with the woody spices building as the sweeter and fruitier notes fade.  Superbly balanced. 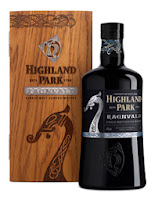 Highland Park Ragnvald
Ragnvald was one of the pioneering Nordic kings and led many expeditions of the Viking fleets.  This included long exploratory trips to the Middle East and Asia, plus they were rumoured to have discovered America - this expedition included an important stop over on Orkney, which was a strategic hub. His icon is the mast head of a Viking longboat. Ragnvald is bottled at 44.6% ABV and will cost €400 a bottle.

The colour is a vibrant golden yellow and the nose is fresh and full of fruity aromas (think of dried apple and mango, prunes and candied lemons in particular).  Underneath are further aromas of honey, ginger, cinnamon bark and a hint of szechuan pepper.  On the palate this is velvety, soft and sweet with delicious woody spices coming through with time.  The smokiness, which is almost undetectable on the nose, is more prominent and has an earthy cigarbox-like feel to it.  The combination of the dried fruits (especially the mango and apple), ginger and cinnamon notes is sublime.  There is also a hint of ginseng root and cocoa powder.  The finish is long and warming with the spiciness and soft smoke holding on as the sweet fruitiness goes. 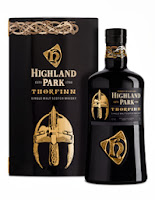 Highland Park Thorfinn
Thorfinn was one of the most powerful Earls of Orkney in the Orkneyinga Saga and his remains are buried in St. Magnus cathedral in Kirkwall. He was a tall, strong and brutal warrior who led his men in to many battles.  His party piece was apparently splitting the skulls of his victims and his whisky uses the icon of a helmet. Thorfinn is the top whisky in the range and is bottled at 45.1% ABV.  It has a retail price of €1,000 a bottle.

The colour is deep golden yellow and the nose is magnificent.  There is a lovely initial aroma of soft muscovado sugar and this combines with vanilla pods, heather honey, malty barley and a hint of orange oil.  There is also plenty of complex woody spice present (think of cinnamon and sandalwood especially) and these combine with a soft, earthy smokiness.  On the palate this feels silky, before turning woodier and drier.  The initial combination of honey, vanilla, maple syrup, dried mango, toasted almond and gingerbread notes is wonderful.  Earthy smokiness develops, as does gripping malt and wood spice (cinnamon and sandalwood again).  There are also hints of liquorice and bitter orange.  The finish lingers for ages with the earthy smoke and ginger notes lasting longest.

What's the verdict?
Highland Park have done well with the Warrior Series.  It is a high quality range of whiskies and one which shows the complexity, depth and all-round ability of Highland Park. The six whiskies are all good in their own way and are well positioned to cater for a variety of tastes and wallet size. We like the fact that the majority are position in the €100 or under category, which makes them very accessible to most consumers.  Picking a favourite is difficult, but probably between the entry-level Svein and Sigurd.  Both seem to offer great value for money.