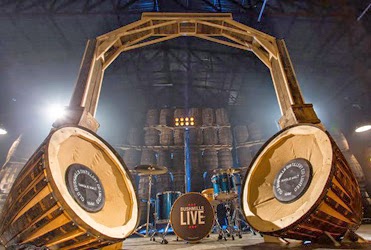 The popular Irish whiskey brand of Bushmills has announced the details of its annual Bushmills Live event.  This year's event will take place over the weekend of June 11 and 12 at the Old Bushmills Distillery on Northern Ireland's rugged north coast.  The headliners for the event are The 1975, a breakthrough indie band from Manchester, UK.

To celebrate the announcement Bushmills have revealed a collaboration with two local artists that has resulted in the world's biggest ever set of headphones (pictured, above).  They have been crafted by Matt Minford and Gareth Martin and stand at just over 10 feet (three metres) tall.  The headphones have been made from 10 Bushmills whiskey casks and will form a centrepiece at the event, allowing festival goers to sit in the middle and listen to music.

Tickets for Bushmills Live 2014 will not be on general sale.  Instead whiskey and music fans need to enter the draw on the Bushmills Facebook page for a chance to win tickets - facebook.com/bushmills. .  Entries to the draw will open on Monday (St. Patrick's Day) at 16:08 GMT (Bushmills was founded in 1608 ...).  Good luck. 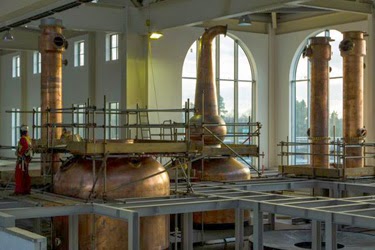 Some time ago, we reported on the forthcoming return of the Tullamore DEW brand to its hometown of the same name in Co. Offaly in the centre of Ireland.  The new facility is being built in Tullamore and has already seen a visitor centre open and prove popular with tourists.  This week the stills have arrived and installation has begun.  The original distillery in Tullamore closed in 1954 and the new facility is designed to increase production and aid the continued growth of the Tullamore DEW brand, which is currently the second biggest selling Irish whiskey in the world.

There are four copper pot stills in total and they have been hand crafted by renowned coppersmiths Forsyths of Rothes.  They are exact replicas of original stills from the old Tullamore distillery.  Each still was made in six separate pieces and then transported from the north of Scotland and across the Irish Sea, before being assembled at the new distillery.  For further information about the brand, please visit www.tullamoredew.com.

posted by Whisky For Everyone at 3:14 PM