The new range of single malts from the Speyside distillery of Mortlach is one of the most anticipated whisky releases for a long time.  Mortlach is highly regarded amongst whisky drinkers and previous bottlings have attained cult status.  Now it is time for the whisky and brand to evolve and introduce new consumers to its delights and qualities.  The new range is formed of four single malts - the Rare Old and Special Strength, plus 18 years old and 25 years old expressions.  In this post, we will be concentrating on the first two whiskies in the range ...

Mortlach is located on the edge of the Speyside town of Dufftown, which is famous for being home to seven single malt distilleries.  Mortlach was the first of these and was founded in 1823 by James Findlater.  It is currently owned by Diageo.  The whisky from Mortlach is mainly used within Diageo's extensive range of blends, most prominently in the hugely popular Johnnie Walker Black Label and Double Black.  The current capacity is 3.8 million litres per year, although plans have been announced that will see the distillery extended significantly and production doubled to almost 8 million litres per year by the end of 2015.

The whiskies are presented in bespoke bottles, which have been designed especially for the new range.  These draw inspiration from Mortlach's history, and specifically the involvement of former owner George Cowie who took over in the 1850s.  He was a previously a trained engineer and was involved in a number of innovative Victorian industrial design projects, including railway bridges and viaducts.  The bottles are 50cl (75cl in the USA for legal reasons) and the two older expressions feature metalwork inspired by Cowie's Victorian designs.

The Rare Old is bottled at 43.4% ABV and will have a recommended retail price of £55.  It will initially be launched in London and Berlin in June, followed by further cities in Asia (Beijing, Hong Kong, Shanghai, Singapore and Taipei) and the USA (Chicago, New York and San Francisco) in August. The Special Strength will be exclusive to the travel retail sector and be available in selected airports from June at a cost of £75 a bottle.  It is the same liquid as the Rare Old but is bottled a higher strength of 49% ABV.

We were delighted and privileged to be invited to an exclusive tasting of the new range in London with Georgie Bell, the newly appointed Global Brand Ambassador for Mortlach, and Dr. Matthew Crow, Diageo Master Blender and one of the masterminds behind the whiskies.  We will be reviewing the 18 years old and 25 years old expressions very shortly, so please watch this space or our social media channels for that ... 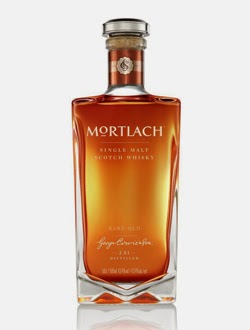 Mortlach Rare Old
The colour is golden amber and the nose is bold, highly perfumed and packed with immediate toffee, fudge, wood spice and dark dried fruit aromas - think especially of cinnamon and raisins.  Underneath is a lovely aroma of stewed apples and toasted almonds along with hints of apricot jam, cocoa powder and something savoury and slightly earthy.

On the palate this whisky has a wonderful velvety viscous feel and mixes sweet, fruity notes with more savoury and spicy ones.  Initial flavours include cooked pears and apples, vanilla, toffee and milk chocolate.  Then comes further fruitiness in the form of raisins and dried apricots, along with an increasing woody spiciness which begins to dry the palate out.  This is most reminiscent of cinnamon with a pinch of nutmeg.  There is also a biscuit-like note.  Underneath is distinctly savoury note that adds complexity - this is difficult to define, but was reminiscent of earthy mushrooms or damp autumn leaves.  Final hints of burnt orange and ginger add even more depth.  The finish is long, rich and warming as the sweetness fades to leave a pleasant drying and slightly peppery spiciness. 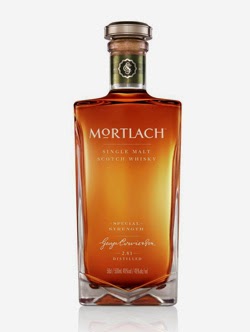 Mortlach Special Strength
The colour is golden amber and the nose is punchy, robust and a little hot.  There are coconut and vanilla aromas to begin with and they are quickly joined by dried tropical fruits (especially pineapple and mango), raisins, coffee and caramel, plus a good pinch of cinnamon and allspice powder.  There is an underlying savoury note, which remains very much in the background and is reminiscent of dry tobacco leaf.

On the palate this feels robust, a little feisty and hot.  There is a lovely battle going on between the sweet, savoury and spicy notes.  First comes delicious sweet notes of toffee, salted caramel and honeycomb.  These are quickly joined by a luscious rich fruity characteristic which is reminiscent of a mix of raisins, dried mango and spiced orange.  Underneath are notes of vanilla, crystalised ginger and vanilla pods, all of which are backed up and complimented by a distinct savoury characteristic.  This manifests itself as a yeasty, slightly meaty note which adds depth, warmth and complexity.  The finish is long and becomes increasingly dry with a lovely tobacco leaf/cigar-like earthiness coming through to compliment the sweeter elements.


What's the verdict?
Both are exceptionally good whiskies that should not disappoint old fans of Mortlach or new converts alike.  They have an incredible depth and complexity, while maintaining a subtlety and classiness not evident in previous distillery releases.  We were lucky enough to sample the Mortlach new make spirit at the event.  Elements of this can clearly be detected and demonstrate a sympathetic use of casks for maturation and the skill of the blenders to create the final product.

The Rare Old is a great entry level whisky and serves as a perfect introduction to what Mortlach is about - robust, spicy, fruity and savoury.  All of these elements are covered and the result is a delicious whisky that makes you want to do back for another sip over and over again.  The Special Strength is a more grown up whisky and packs a real punch.  Everything in the Rare Old is exaggerated and the result is a complex and feisty whisky that is definitely worth checking out when traveling through an airport.

posted by Whisky For Everyone at 5:54 PM

Great Stuff, can't wait to get my hands on one of these, I was a bit disapointed by the 1824 Macallans, how would you say they compare?

I saw the Rare Old For $125 in a shop yesterday. While I am interested in trying this, $125 for an entry level offering is very excessive.

NH is planning on selling the rare old for 89.99. I just got an advance bottle from a friend. Hoping to try it tonight.

Thanks for the overview. Yes, the Rare Old is expensive for a base expression - and it would be good for people to sample it first, since not all will like the signature "meatiness" of Mortlach (i.e., sulphur compounds). Relatively well priced here in Ontario, for some reason ($100 CAD, which is ~$80 USD at present).