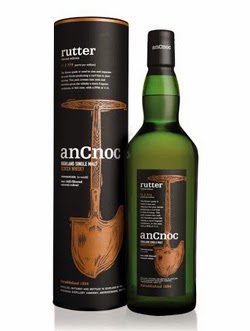 AnCnoc - Introduces some peat
The Highland distillery of Knockdhu have announced three new limited edition whiskies in their AnCnoc single malt range.  The Peaty Collection marks a new chapter in anCnoc's history as they are the first smoky whiskies to be released by the brand. The distillery has been making peated spirit in limited runs for the last 10 years or so.  The Rutter (pictured, left), Flaughter and Tushkar expressions are all named after traditional tools used to cut peat. 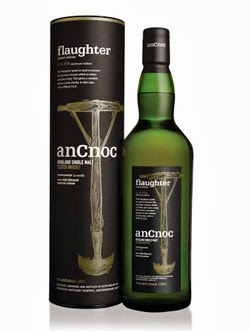 All three whiskies have been matured in ex-American oak casks, although the specifications and cask sizes differ.  All are bottled at 46% ABV, are non chill-filtered and are of natural colour.  The Rutter has a peating level of 11 PPM (Phenol Parts per Million) and the Flaughter (pictured, left) is 14.8 PPM and is initially exclusive to the UK.  They have a recommended retail price of £52 each. The Tushkar is 15 PPM and is exclusive to Sweden, with a recommended retail price of 449SEK (£41.50).  All are available now.

Arran - Heaven 17
The independent Arran distillery have announced the release of a 17 years old expression, their oldest single malt to date.  It is the second whisky in a trilogy which saw a 16 years old released last year and culminates in an 18 years old bottling next year.  The whisky has been matured in ex-sherry casks and there are just 9,000 bottles released worldwide.  It is bottled at 46% ABV, is non chill-filtered and of natural colour.  A bottle has a recommended price of £64.99 and is available from specialist retailers and www.arranwhisky.com.

Euan Mitchell, Managing Director at Isle of Arran Distillers, said: “We’ve got some big plans for 2014 and I’m excited that we’re kicking off the year with this fantastic whisky. We always challenge ourselves to produce something people will find genuinely interesting and different. This 17 Year Old malt is some of the first whisky we laid down when the distillery opened in 1995. I’m sure it won’t disappoint our discerning customers.”

Ardbeg - Annual release announced
News of the annual Ardbeg Day release always creates a stir in the whisky industry and this year's is no different.  This year's release, named Auriverdes, has been matured in American oak casks with specially toasted cask lids that were created specially for this whisky.  The name means 'gold and green' and is the nickname of the Brazilian football team, the hosts of this year's football World Cup.  In this case, 'gold' refers to the whisky and 'green' refers to the bottle ...

The Auriverdes will be released on May 31, which is officially Ardbeg Day at the annual Islay Festival.  The launch will be supported by numerous football related events around the world.  It has been bottled at 49.9% ABV and will be available at the distillery or via www.ardbeg.com.  No details of price have been announced to date.

Dr Bill Lumsden, Director of Distillation and Whisky Creation, explains: “When creating Auriverdes I had a distinct flavour profile in mind, so I specifically created the heart of the recipe to bring that to life. It is an expression of Ardbeg which has exceeded all my expectations – it has trademark Ardbeg undertones with a distinct new taste experience. Auriverdes has an explosive mouthfeel which gives way to complex flavours and a good sweet/salty balance.”

J&B - New flavour
Diageo have announced a new spirit drink based around its popular J&B blended Scotch.  The J&B Urban Honey is made by infusing the J&B blend with honey and is bottled at 35% ABV.  It has been made exclusively for Spain, which is one of J&B's largest markets, and is designed to be consumed over ice or as part of a cocktail.  The drink has evolved J&B's strong branding, featuring a honeycomb design on the label and a large bee replacing the letter 'B'.  It will launch in April.  No pricing information has been announced.

posted by Whisky For Everyone at 11:01 PM