Within Inbox we aim to write a few lines detailing each press release/piece of news/PR event that we have received and provide links, where possible, for you to find out further information.  The whisky world and PR departments have well and truly woken up this week with a number of exciting new releases announced.  Here is what has caught our attention ... 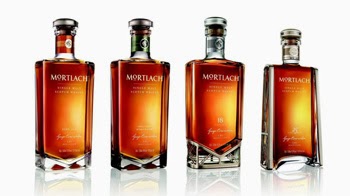 A couple of months ago Diageo, the owners of the Mortlach, announced a new range of single malts from the Speyside distillery.  Now they have revealed a radical new bottle design for the range, plus further distribution and pricing details.  The bottles (pictured, above) have been inspired by the engineering background of Mortlach's founder George Cowie and feature a faceted base on the Rare Old and Special Strength expressions, plus metalwork on the 18 and 25 year olds.  This news comes in addition to the other recent announcement of a massive expansion plan for the distillery.

The bottles have been designed as 50cl size due to the limited nature of the four liquids.  They will be 75cl in the USA due to legal reasons.  The Rare Old will have a recommended retail price of £55, with £180 price set for the 18 years old and £600 for the 25 years old.  These three expressions will initially be launched in London and Berlin in June, followed by further cities in the Asia (Beijing, Hong Kong, Shanghai, Singapore and Taipei) and the USA (Chicago, New York and San Francisco)  in August.  The Special Strength will be exclusive to the travel retail sector and be available in selected airports from June.

Singleton of Dufftown -  Fish for new fans
The popular single malt brand of Singleton has added two new expressions to its range from the Speyside distillery of Dufftown.  Sunray and Tailfire will sit alongside the core range of 12, 15 and 18 years old bottlings.  The names are that of two types of artificial fly used in salmon fishing and pay homage to the brand's leaping salmon logo.  The aim of the new products are to introduce new consumers to whisky and the Singleton brand.

Sunray (pictured, above) has been matured in toasted ex-bourbon casks and has a recommended retail price of £36 for a 70cl bottle.  It will be available only in specialist whisky retailers.  Tailfire (pictured, left) has been matured in a higher proportion of European oak casks and will cost £33 a bottle.  It will be more widely available through grocery stores, plus specialist retailers. Both have just been released in selected European markets of Belgium, Denmark, France, Holland, Switzerland and the UK.  Sunray has also been released in Germany, with Tailfire following in the Summer.

Both expressions have been created by Diageo Master Blender, Dr Matthew Crow.  He comments, “I am immensely proud of these two single malts. Tailfire and Sunray embody the future of whisky, and have been created to inspire a new generation of whisky drinkers. The Singleton is a much loved Speyside whisky, and has always put great taste and flavour at the heart of their single malts.”

Tormore - Re-branded and new products
The Speyside distillery of Tormore has a new look for 2014 and has announced two new bottlings to support the re-branding.  Tormore is owned by Chivas brothers, the Scotch whisky arm of Pernod Ricard, and they have unveiled a new logo (pictured, left) and the packaging has been overhauled.  Both highlight the distillery's scenic location and its stillroom.  There is also a new website for the brand - www.tormoredistillery.com.

The two new single malt whiskies have been produced in small batches, with the casks used having been hand selected by Tormore's Distillery Manager Neil Corbett.  They have been bottled at 14 and 16 years of age, and are presented in the new contemporary packaging (pictured, left).  Both have been matured in American oak casks and have initially been launched in France, with other markets to follow throughout 2014.  The 14 years old is bottled at 43% ABV and costs €42, with the 16 years old at 48% ABV and €56.

posted by Whisky For Everyone at 9:40 PM