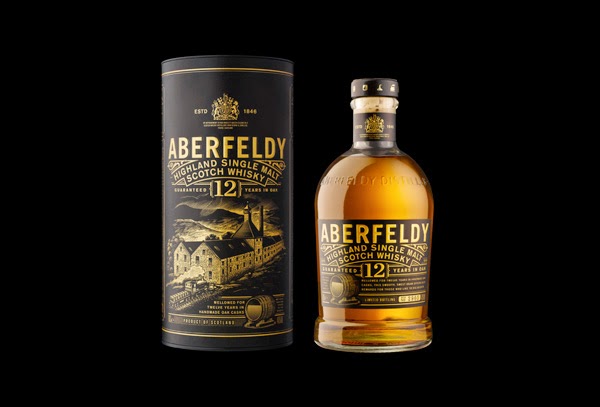 This whisky is the flagship single malt from the Highland distillery of Aberfeldy.  It has just recently been re-launched with new packaging.  This is pictured above and focuses on numerous aspects of the distillery's history and heritage, with the gold lettering paying homage to the discovery of gold particles in the local river.  This new identity, which is the first re-branding for Aberfeldy since 1999, forms part of a larger plan for its single malts - the current 21 years old expression has also been given new look, a new travel retail exclusive 18 years old has been added with more ages planned to join the 12 and 21 year olds in the core range.

Aberfeldy is located in the hamlet of the same name in the southern Highlands.  It is currently owned by John Dewar & Sons, which is a subsidiary of the larger global Bacardi group.  The distillery is engrained in the history of the Dewar's blended Scotch brand, as it was founded and built by John and Tommy Dewar in 1896 with the objective to make single malt for their popular White Label.  The White Label remains one of the world's best known brands is firmly in the world Top 10 for blended whisky sales, with particular strength in the USA.  The distillery has a current annual production capacity of 3.5 million.

Aberfeldy is also home to the Dewar's World of Whisky, which attracts thousands of visitors each year and has just seen a major renovation completed for this Summer.  This, and the distillery's relative proximity to Edinburgh, makes Aberfeldy one of the most visited distilleries in Scotland. This 12 years old expression is bottled at 40% ABV and is available through specialist whisky retailers and larger supermarkets for around the £35-40 mark.

Our tasting notes
The colour is amber and the nose is aromatic, sweet and deliciously promising. There are immediate aromas of toffee, caramel and plenty of dark dried fruits (think of raisins and sultanas in particular).  Underneath are aromas of honey, malted barley and candied orange peel and these are complimented by a hint of cinnamon.

On the palate this whisky feels viscous, creamy, rich and warming.   The prominent notes are similar to the nose and the sweet toffee and caramel characteristics lead the way, backed up by the dried fruits (the sultanas are particularly vibrant now) and robust malty cereals.  These elements mingle with notes of honey, vanilla and some warming woody spices.  Cinnamon and nutmeg come through especially and balance the sweeter notes, as does a hint of gingerbread and liquorice.  A late note of candied/dried orange peel finishes the palate off nicely

The finish is long and slightly fresher than the nose or palate suggests.  It is fruity (the raisins and orange again) and flavoursome with the sweet toffee fading slowly, and the spicy nutmeg and woody cinnamon notes coming through again right at the end.

What's the verdict?
This whisky is lovely and rounded.  It is rich and full of flavour. While it is not the most complex single malt, but has enough to maintain the interest of the drinker for a number of glasses ( - trust us on this one ...!).  We would definitely recommend it for a whisky beginner and especially if you were looking for an 'undiscovered gem'.

We also have to comment that the re-branding is excellent and gives Aberfeldy a presence on the retail shelves that it has been lacking for sometime.  It is worth a close up look if you get the chance for the impressive level of detail alone.

That really is superb design work on the label!

I had a look at this in my local supermarket last week. Although the design is very eye catching, (as far as I can remember) there are no tasting notes on the container.
I think tasting notes are the bear minimum required. The rest of the 'bunf' about the history of the distillery is nice but unnecessary.
BTW I didn't buy it. I bought a bottle of Strathisla 12 yr instead. If any whisky brand needed a makeover it's this.

eToro is the #1 forex broker for new and professional traders.