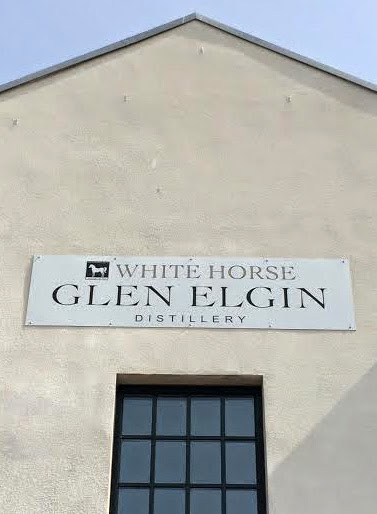 At the beginning of May, we paid a visit to the annual Spirit of Speyside Festival. One of the biggest highlights of our trip was a special tour, which is only run once a year during the festival, called The Laich of Moray. This tour takes in four of Diageo's single malt distilleries around the Elgin area of Speyside that are not normally open to the public - Glen Elgin, Glenlossie, Linkwood and Mannochmore. Our guide for the trip was Eric Walker, the Senior Site Manager in charge of the four distilleries.  The second distillery of the glorious Spring day was Glen Elgin ...

Glen Elgin is located a mile or so outside of Elgin, close to the hamlet of Fogwatt and just down the road from Linkwood.  In fact, they are so close to each other that they share the same water source.  The distillery was founded in 1898 by bankers James Carle and William Simpson, and production started in 1900.  It was designed by renowned distillery architect Charles Doig.  The significant date in the distillery's history is 1930 when it was bought by SMD (Scottish Malt Distillers).  They licensed it out to White Horse Distillers and the single malt produced at Glen Elgin has been used in the famous White Horse blended whisky ever since.


We were greeted at the distillery by Kwanele Mdluli, the Site Operations Manager of Glen Elgin, who led us to the milling room via the malt bins that can store up to 400 tonnes of grain.  This room was to give us a clue as to what the rest of the distillery would be like.  It was a small, cramped that the whole group struggled to fit in, especially the area where Kwanele explained to us about the milling and how they gauge the make up of their grist.  This is done using the new machine pictured above, which separates the grist into eight parts instead of the more traditional three parts.  The mill itself dates back to the SMD days and remains painted in 'Scotch Malt Distillers blue'.


A set of narrow stairs took us in to the mash room, where the mash tun filled the space.  There seemed minimal space, especially for the size of our group, and it felt as if various pipes criss-crossed in all directions from head height and above.  The mash tun can hold 8.2 tonnes of mash (the mix of grist, water and soluble sugars drawn from the grist).  The mash is continually sparged with water rather than having separate waters added at different temperatures to extract the the soluble sugars.


The next stop is the fermentation room.  Here the wort created in the mash tun is transferred to the huge washback tanks for the fermentation process to take place.  The washbacks are wooden and made of larch.  Each holds a staggering 40,000 litres of liquid and there are nine in total - six in the distillery building and a further three, which are housed in a new extension that was completed in 2013.  Talking with Kwanele, he explained that these were added as it was the most efficient way to increase the production capacity of the distillery.


The still room was the most spacious area of Glen Elgin.  Six stills sit in a regimented line - three wash stills and three spirit stills - and the room was airy and well lit.  This is really the first area where it became evident that the distillery is not open to the general public.  There are no shiny copper stills ... Glen Elgin's are tarnished with hard work and currently produce 2.6 million litres of new make spirit per year.  We were treated to a chat with Mikie the stillman, who explained some of the intricacies of the distillation process.


The spirit vapour produced by the stills is condensed using traditional wormtubs.  Glen Elgin is one of the few remaining distilleries in Scotland to use this method and there are six there - one for each still.  Most now have modern column condensers.  A wormtub is a large vat of water that has a coiled copper tube running through it.  As the the vapours travel through the coil they condense back in to a liquid and are then collected.  It is rare to see a set of wormtubs and we had a treat in store, as Eric and Kwanele took us up to the top of them to have a look inside.


The new make spirit is taken and matured at two of Diageo's local distilleries at Auchroisk and Glenlossie.  There are only two dunnage warehouses on site at Glen Elgin, which are home to a selection of older maturing stock.  The main distillery and other buildings are located around a large courtyard area and this gave a nice feel to Glen Elgin.  The cramped feel inside backs this feeling up.  It is very much a working and functional distillery.  We felt privileged to have visited and thank Kwanele for his extremely warm hospitality and the time taken talking with us.


Our final treat of the tour turned out to be a tasting of Glen Elgin 12 years old in Kwanele's office.  This is the only expression of Glen Elgin that is regularly available on the market.  Other older versions are occasionally released as part of Diageo's Special Releases programme.  As mentioned most is used in the White Horse blend, which sells a staggering 12 million bottles a year.  It is predominantly matured in ex-sherry casks and gave a lovely soft mix of toffee, fresh green apple and cinnamon.  To read our full review and tasting notes of Glen Elgin 12 years old - click here.


posted by Whisky For Everyone at 8:06 PM