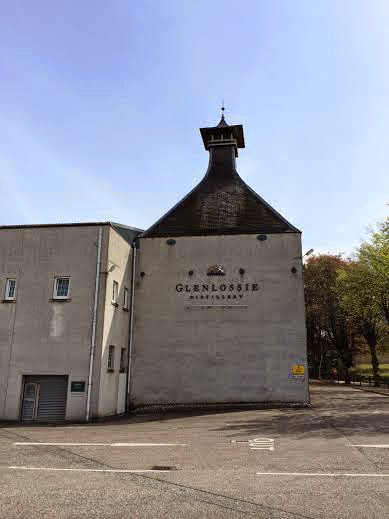 At the beginning of May, we paid a visit to the annual Spirit of Speyside Festival. One of the biggest highlights of our trip was a special tour, which is only run once a year during the festival, called The Laich of Moray. This tour takes in four of Diageo's single malt distilleries around the Elgin area of Speyside that are not normally open to the public - Glen Elgin, Glenlossie, Linkwood and Mannochmore.

Our guide for the trip was Eric Walker, the Senior Site Manager in charge of the four distilleries.  The third stop on the tour was Glenlossie, where we were shown around by Sandy McIntyre, the Site Operations Manager.


Glenlossie was founded in 1876 by John Duff.  He was the former manager of Glendronach in the east Highlands and remained in control until 1896 when he left to start the nearby Longmorn distillery.  It became part of DCL (Distillers Company Limited) in 1919.  DCL is the forerunner to SMD (Scottish Malt Distillers) - this is the company that would eventually become part of Diageo, the current owners.  Glenlossie is operated by Diageo to provide light, grassy spirit that once matured will be used in Diageo's extensive range of blended whiskies, and is a particularly important component in the Haig range.


We began in the mash room, which was home to a large mash tun.  This was installed in the 1990s and the room was spacious with the tun at one end of it.  Sandy talked through various aspects of the production process at Glenlossie, including the facts that the mash tun capacity is eight tonnes and that they have changed the number of mashes per week from 12 to 17 as they look to maximise the production capacity of the distillery.  He also explained they were planning an upgrade for later in the year, which includes a new mash tun and an extra washback.  This will also increase capacity.


We move through to the fermentation room, which is again spacious and home to eight wooden washback tanks.  These are made of larch and are positioned with three on one side of the room and four on the other as pictured above.  The eighth is in a tiny room at the back, which is accessed through the doorway in the back of the picture.  These are slowly being replaced with exact replicas over time.  Each washback holds 35,500 litres and the current fermentation time at Glenlossie is around 60 hours.


Glenlossie's still house is home to six large stills and these produce around two million litres of new make spirit per year.  The shape and size of these stills has remained the same since the originals were installed in the 1870s.  We got to see the wash bubbling away in the stills, which could be seen through small viewing windows and also the new make spirit coming off (see the videos, below).  The condensers, where the spirit vapour is re-condensed to a liquid, also have purifiers fitted.  These increase the reflux of vapours back to the still, which are re-distilled and help create a lighter spirit.


Glenlossie is also home to one of Diageo's largest bonded warehouse sites in the Speyside region.  Within these are stored approximately 250,000 casks of maturing spirit and these come from distilleries all around the Diageo estate.  We were not granted access to any of these because of time constraints.

Glenlossie felt like a modern distillery but in an older shell.  It generally had an open feel, unlike the more cramped Glen Elgin that we had previously visited.  As with the others on The Laich of Moray tour it was interesting to see a working distillery that was not geared to visitors and talk with Sandy about the specific issues and challenges there.  We would like to take this opportunity to thank Sandy for his hospitality and time.

posted by Whisky For Everyone at 8:16 PM