A couple of months ago we went to Australia and during this trip we visited the Whisky Live event in Adelaide.  We were hoping to sample some of the Tasmanian whiskies that are taking the world by storm but were disappointed that very few were on show, especially as some had claimed recent major prizes.  However we did discover something new.  A brand that we were not aware of.  Tucked away in the corner of Whisky Live Adelaide, we discovered Starward whisky.

Starward is produced at the New World Whisky Distillery and is located in Essendon Fields, a suburb of Melbourne in the state of Victoria.  It was founded by David Vitale in 2004 after a visit to a micro-distillery in Tasmania captured his imagination.  The following five years were used to construct the distillery and to develop the desired mashing, fermentation, distillation and maturation techniques.  They use 100% Australian barley that is malted to their exact specification and production finally began just over four years ago.


"Starting a distillery with a blank sheet of paper is both refreshing and daunting. A whisky unshackled from tradition needs to play to the strengths of the place and the people making it."
David Vitale, Founder of the New World Whisky Distillery.


The first release was Starward Single Malt.  This appeared in March 2013 and has been matured in reconditioned Australian oak casks, which have formally been used to age an Australian version of sherry called Apera.  This is bottled at 43% ABV and costs around the $80 AUD (£38) mark.  The Single Malt is aimed at introducing a younger vibrant crowd to whisky and for use by bartenders in cocktails.  The label design and marketing material reflect this.

It was joined recently by Starward Wine Cask - this is also a single malt but has been matured in local red wine barrels for three years.  This was introduced to appeal to those consumers with more whisky knowledge and retails for approximately $85 AUD (£40).

There are also a series of bottlings named New World Projects that appear from time to time - these are innovative series of experiments to show the versatility of the spirits in different casks.  All are currently only available in Australia, but work is ongoing to secure distribution in other markets. 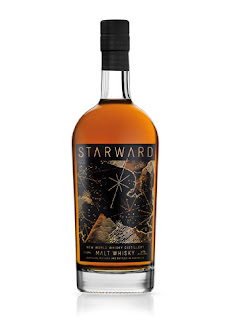 Starward Single Malt
The colour is golden yellow and the nose has immediate aromas of fresh green apple and honey.  These are backed up by warming ginger-like spice and hints of toffee and candied lemon peel.  On the palate there is an initial light, fresh lemony tangy note but this softens to reveal a delicious mix of flavours - toffee, green apple, dried pear, golden syrup and some bittersweet malted barley.  Further notes of gingerbread, cinnamon and burnt caramel are also present.  The sweetness and freshness carry through to the finish, which is quite short as a result.  The warming spices come through well towards the end. 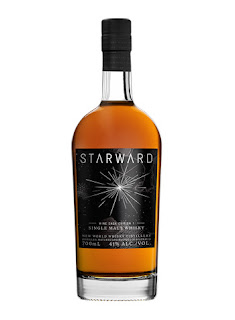 Starward Wine Cask
The colour is golden amber and the nose has instant aromas of golden syrup and black treacle.  With time dried fruits, especially raisins and sultanas, and malty cereals come through. There are also aromas of spiced orange peel and something floral like honeysuckle in the background.  On the palate this is mouth coating and viscous with notes of treacle and bitter chocolate evolving in to dried red and dark fruits (think of cranberries and raisins especially) and cinnamon.  Sweetness is provided by golden syrup and brown sugar notes.  The finish becomes very dry, spicy and bitter once the sweeter elements fade.


What's the verdict?
Both of these Starward whiskies are very good and many other the new craft distilleries that are popping up around the world could do well to look at what the New World Whisky Distillery are doing in terms of quality.  They took their time to research what was going to make their product the best that it could be and did not rush in to releasing anything.  Others could learn from that approach.

The Single Malt is easy drinking, light in body and sweet.  It is not the most complex whisky but highly enjoyable to drink neat and would stand out in a cocktail, as it is intended to do.  The Wine Cask is heavier, richer and more robust.  New whisky consumers may find it too challenging but the Single Malt would be perfect for them.  Both are very impressive and it will be very interesting to see how the brand and range develop over time, and as Starward spreads to other markets.

* Thank you to David Vitale and Brand Ambassador Paul Slater for supplying us with the samples and for talking to us at length during Whisky Live Adelaide.  Please note that all images and logos are copyright of the New World Whisky Distillery.

posted by Whisky For Everyone at 8:14 PM

Regarding your comments about the apera cask vs the wine cask and the complexity of the wine cask perhaps being less appealing to casual whisky drinkers: I thought the exact same thing.
But on a recent visit to the distillery (http://whiskywaffle.com/2015/07/14/navigating-to-the-new-world-distillery-meet-the-purveyors-of-starward/) I took several whisky novices along with me. And while I found myself a sucker to the sweet orange notes in the apera cask the others unanimously favoured the wine cask. They said it was smoother and easier drinking.
Go figure!
Keep on waffling,
Nick