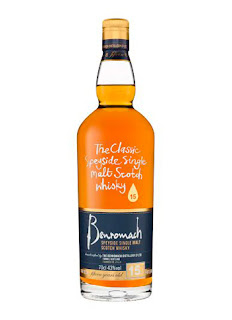 This whisky is the latest new single malt from the small independently owned Speyside distillery of Benromach. The 15 years old expression is designed to show a single malt style from the post-Second World War years, when many Speyside whiskies still had an element of peat smoke in them.  This is aided by the distillery's boutique manual approach to whisky making, which has not really changed since that period.  The 15 years old has been matured in a specially selected combination of ex-bourbon and ex-sherry casks, some of which have been heavily charred, with the larger percentage being ex-sherry casks.


Benromach is the smallest working distillery in the Speyside region and is located on the outskirts of the town of Forres. Only three people are employed there and the current annual production capacity is just 500,000 litres per year. It was founded in 1898 under the name of Forres Distillery and was designed by renowned distillery architect Charles Doig. It became known as Benromach in 1919 and the current owners are Gordon & MacPhail, the leading independent bottling company, who are based in nearby Elgin. They took control of Benromach in 1993 and fully renovated the distillery. It had been closed for the previous 10 years and was re-opened by Prince Charles in 1998.


"The whisky is for those who would like to see what a classic pre-1960s Speyside malt is like."
Ewen Mackintosh, Chief Operating Officer of Gordon & MacPhail.

The Benromach 15 years old joins the regular 10 years old, 10 years old 100° Proof, Organic and Peat Smoke expressions in the current core range.  It is bottled at 43% ABV is available now in selected specialist retailers with a recommended price of £49 a bottle.

Our tasting notes
The colour is golden amber and the nose is very promising.  There are plenty of caramel and raisin aromas that hit first, which are supported by notes of golden syrup, further dried fruit (orange, fig and dates) and a distinct earthy smoke.  There are also hints of bitter chocolate, popcorn, cloves and walnuts.

On the palate the whisky has a rich, velvety and mouth coating quality.  The first flavours to reveal themselves are the dried fruits (especially the juicy raisins) from the nose and a lovely honeycomb golden syrup note - this in particular adds to the rich, mouth coating feeling.  The other dried fruits (such as the figs and candied orange) are pushed back and joined by dried green apple and a hint of mint, which both add a pleasant freshness.  The soft earthy, spicy peat smoke is never far away and sticks to the taste buds.  The earthiness is exaggerated by a lovely note of ginger root.  Late hints of chocolate and cloves add further depth.

The finish has a lovely lingering sweetness, which highlights the honeycomb, caramel and raisins especially, and this fades gently to allow the drier earthy smoke to slowly take over.  This has a warming and savoury edge with a slight acrid bitterness right at the end.

What's the verdict?
This is a delicious, rich Benromach that is full of character.  The balance of sweetness and the earthy peat smoke is very good and other elements add plenty of depth and complexity, although the acrid/bitter element on the finish is the only slight negative.

This 15 years old expression also offers great value for money at around the £50 mark.  Is it representative of a post-War malt?  Who knows without cracking open a bottle from that time?  However, we like the concept behind it.

Did you know that you can create short urls with AdFly and make money for every visitor to your short links.