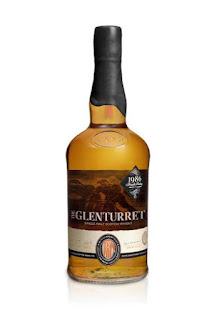 The Glenturret distillery, which is located in the Highlands and is the spiritual home of The Famous Grouse blend, has released this single cask bottling. The Brock Malloy Edition Cask #328 is named after legendary Glenturret stillmen Chic Brock and Hugh Malloy, who produced the spirit and filled it to cask in December 1986. It has been maturing at the distillery ever since and was identified by current distillery manager, Neil Cameron, as being one of the best and oldest remaining in the warehouses.  The decision was taken to bottle it to celebrate the work of the two men.  Bottles are only available via the The Famous Grouse Experience website or by visiting the distillery.

Glenturret is officially the oldest whisky distillery in operation in Scotland and is located in the Perthshire town of Crieff. It was founded by a group of illicit whisky producers in 1775 and was originally a small farm operation called Hosh Distillery.  This was finally legalised in 1837 when John Drummond took over. The name was only changed to Glenturret in 1875 on the 100th anniversary of production and has remained that ever since.

Glenturret is one of the smaller distilleries in Scotland with an annual production capacity of only 150,000 litres.  It is currently owned by the Edrington Group, who took control in 1999.  Whisky from Glenturret is used predominantly in The Famous Grouse range of blended whiskies and in 2002 The Famous Grouse Experience was opened at the distillery - it has become the most visited distillery in Scotland as a result with over 100,000 people visiting each year.

"In 1986, the two stillmen here lovingly crafting a Highland single malt in Perthshire. You can taste the passion and the fine workmanship in the liquid."
Neil Cameron, Distillery Manager at Glenturret.


There are just 240 bottles available of The Brock Malloy Edition Cask #328 and it has been bottled at the natural cask strength of 47% ABV.  Each bottle is presented in a wooden frame crafted by local carpenter Mike Dempsy and is individually numbered and signed by Neil Cameron. The price is £200 each.

Our tasting notes
The colour is golden yellow and nose has a lovely mix of sweet, fruity and spicy aromas - there are immediate notes of honeycomb, toffee, stewed apples, burnt orange and cinnamon.  These are backed up by a robust malty cereal aroma and further woody and earthy spices, especially nutmeg and ginger.

On the palate, it is the woody and earthy spices that hit first.  This creates an initial dryness that has elements of cinnamon, all spice, ginger and white pepper.  The robust malted cereal note from the nose is also evident and this adds a little pleasant bitterness before some much needed sweetness.  Then the sweet and fruity characteristics kick in and the jigsaw starts to take shape.  A delicious mix of honeycomb, toffee, crisp green apple (toffee apple maybe?), peaches, dried pears and dried orange add incredible depth and complexity.  These are accentuated by some late notes of clove, menthol and cocoa.

The finish is long and warming.  The earthy wood spices take centre stage, especially once the sweeter characteristics begin to fade.  The whisky seems to coat the taste buds and has a mouth watering quality that makes you want to take another sip.

What's the verdict?
There are not many Glenturret single malts out there on the market, because most of its small production gets used for its 'signature malt' role within Famous Grouse.  As a result we have not sampled very many but this one is a beauty.  The delicious mix of characteristics makes this a rewarding whisky and one that is very pleasant to drink.  There are not many bottles left, so if you want one then get one before it is too late.