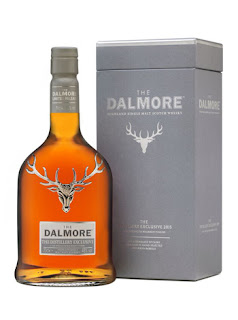 The north Highland distillery of Dalmore have released a limited edition whisky that is exclusively available at their visitor centre in Alness. The Distillery Exclusive 2015 has been created by the Dalmore's Master Distiller Richard Paterson and he has constructed the whisky from a combination of single malts matured in ex-Madeira, ex-Moscatel and ex-Port casks. These have then been finished in first fill ex-bourbon casks for a short period. The Distillery Exclusive has been bottled at 48% ABV and there are just 450 bottles, which will cost £150 each.

Dalmore is located in the northern Highlands and is about half an hour's drive north of Inverness. It sits on the shores of the Cromarty Firth, Scotland's deepest sea loch, and overlooks the Black Isle.  Dalmore was founded in 1839 by Alexander Matheson and has an interesting history, including being used during the First World War by the Royal Navy to manufacture explosives. The current capacity of the distillery is four million litres per year. Dalmore is currently owned by Whyte & Mackay, which is now part of the larger Phillipines based Emperador Inc. They also own the famous Whyte & Mackay blended whisky brand, plus the distilleries at Fettercairn, Jura and Tamnavulin.

“The Dalmore Distillery Exclusive 2015 is a stunning whisky. Our artisanal approach to whisky making bestows this bottling with a bold colour, aroma and palate.”
Richard Paterson, Dalmore Master Distiller.

Our tasting notes
The colour is a deep orange amber and the nose is full of rich, sweet aromas.   This includes some sugary dried fruit (especially sultanas and candied citrus, both lemon and orange), toffee, butterscotch and late wood spices (think of cinnamon).  There is also a vibrant spirity note that adds freshness.

On the palate this feels surprisingly light given the rich and sweet feeling of the nose.  It is lively and a little hot on the taste buds.  The sweetness is the first element to really hit and this manifests itself as notes of crumbly brown sugar, dark dried fruits (think of sultanas and raisins), milk chocolate and toffee/fudge.  There are also fresher fruit notes in there, especially green apple and white grapes, plus a hint of maraschino cherry.  These are all backed up by an increasing wood spice (especially cinnamon again) and a bitter orange note that is reminiscent of marmalade.

The wood spices carry on into the finish and give the whisky a warming, almost earthy quality.  The sweet and fruity notes fade quite quickly to leave just these spices, especially the cinnamon element, plus a hint of white pepper.

What's the verdict?
Dalmore is usually associated with the richer, sweeter and viscous style of whisky.  This distillery exclusive does have those elements but not in the same abundance as in most other bottlings that we have sampled.  As a result it feels lighter and fresher than anything we have tried from Dalmore and is therefore a bit of a surprise.  The combination of casks is interesting and we are sure it will sell well from the distillery shop.