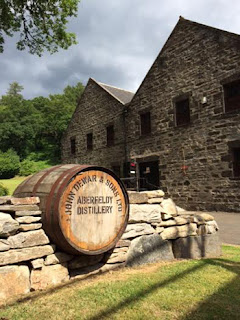 Aberfeldy is one of the most visited whisky distilleries in Scotland, despite the Aberfeldy range of single malt not featuring in the world's Top 20 best sellers.  Its Highland location and relative proximity to Edinburgh and Glasgow help a lot but the main reason for its popularity is the distillery's importance to Dewar's, one of the most popular blended Scotch brands.  Aberfeldy is one of the signature single malts in the Dewar's range and this is reflected in the Dewar's World of Whisky visitor centre being at the distillery.

Aberfeldy was founded in 1896 by John Dewar & Sons and was built to secure a consistent supply of single malt for their increasingly popular Dewar's blended Scotch, sales of which were booming at the time.  It was designed by the legendary Victorian architect Charles Doig, who was responsible for the construction of numerous new distilleries in the Highlands and Speyside regions during the late 19th century.  The distillery remains under the ownership of John Dewar & Sons to this day, although the company is now part of the larger Bacardi Brown-Forman group.


As we waited for our tour to begin, we tucked in to a hearty lunch served up by the cafe at the visitor centre.  This space also featured the shop, which featured Aberfeldy and Dewar's core range products plus a number of special editions and other whiskies from Bacardi's portfolio, and a bar.  The first part of the tour was a short film about the history of Dewar's and the role of Aberfeldy, which was hosted and narrated by eminent whisky journalist Charlie Maclean.  A number of tours that we have taken have started with a brand film, but few have been shown in a plush mini cinema setting like at Aberfeldy.


Once the informative film was over we moved through to an impressive exhibition that showcased a large amount of Dewar's brand memorabilia through the ages including many vintage posters, documents and marketing tools.  Amongst the fantastic selection of items was a recreation of the office of John Dewar, the founder of the Dewar's brand and Aberfeldy distillery, complete with some of his possessions and original company paperwork.


The Dewar's whisky brand was founded by John Dewar in 1846 and was sold from his small grocery and wine merchant shop in Perth. The brand grew rapidly especially once John's sons, John Alexander and Tommy, took over.  It was them that took the decision to build Aberfeldy and its location within a reasonable traveling from Perth.  Dewar's is now the best selling Scotch whisky in the USA and one of the top five best selling Scotch blends in the world.  We could have literally spent double the time in there but well trained tour guides wait for no man, even whisky bloggers ...


The first stop on the tour was the mill, which grinds the malted barley to the correct consistency for whisky making.  This was hemmed in to a cramped room that seemed to have been built around it and felt slightly claustrophobic.  Next to this was a large hopper for malt storage prior to the milling.  We moved up a set of metal stairs to the left of the mill and up to another small room containing the stainless steel mash tun.

Opposite the mash tun was an entrance to the area where the fermentation stage of the whisky making process takes place.  This seemed more open and airy.  The distillery has a total of 10 washbacks - eight made of Siberian larch wood and two of stainless steel - and these are operated on a rotational basis to produce a consistent supply of 8% ABV wash for distillation.  There was a heavy but pleasant malty smell in this room, which was partially divided in the middle.

The stillroom at Aberfeldy was seperate from the rest of the production facilities and accessed via a set of stairs and a corridor.  The stillroom was bright and open.  This was aided by one side being fully paned and these large windows can be rolled up to help regulate the temperatures within the room.  There were two pairs of steam-heated copper pot stills - the wash stills have a capacity of 16,500 litres each, the spirit stills 14,000 litres - and these give the distillery an annual capacity of 3.5 million litres in total.  The final spirit is filled to casks at a strength of 63.5% ABV.

Now, our tour took a slight detour from the regular ones.  We were taken to view the distillery's water source.  This involved a walk along a woodland path that hugged the Pitilie Burn, the name of the stream that Aberfeldy draws its water from.  A small covered area was located at the top, which we made it to just in time before it started raining, and we tasted Aberfeldy 12 years old.  A sample of water from the Pitilie Burn was also supplied, so we just had to try it.  The water was lovely and crisp on its own and brought out some lovely fudge and malt notes in the whisky.

Our final stop was one of the warehouses.  This was located back down the woodland path and opposite the main distillery buildings.  Inside was a selection of different casks and also the opportunity to fill our own bottle from a selected cask - this was an ex-bourbon cask from 1994, which was 20 years of age and with a natural cask strength of 56.9% ABV.  We always enjoy doing this - here we got to write our own label, fill in the duty book and seal the bottle stopper by dipping it in wax.

Aberfeldy is a lovely and picturesque distillery.  It should be popular with visitors for just this reason alone, but its close proximity to the Central Belt and the presence of the Dewar's World of Whisky make it one of Scotland's most visited distilleries.  Apparently it gets very busy during the peak tourist season in the Summer but the distillery shows you all aspects of the production process and seems quite traditional.  Well worth a visit, especially as you also get the opportunity to bottle your own whisky afterwards.

Tours
Aberfeldy is open all year round, although hours are reduced during winter months.  They run a variety of tours from standard (£9.50 per head) to connoisseur level (£25 per head).  The standard tour is also operated in seven languages.  For opening hours, times and further information on tours please visit the Dewar's website or contact the distillery visitor centre directly on (+44) 01887-822010.


posted by Whisky For Everyone at 8:44 PM