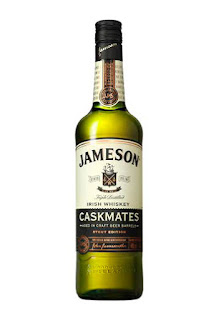 The Jameson Caskmates is an innovative new collaboration that sees the famous Midleton distillery, where the hugely popular Jameson brand is produced, working in conjunction with craft brewery Franciscan Well.  Both are based in Co. Cork in the south of Ireland and the release follows a successful trial in Ireland last year.  The partnership sees Franciscan Well age a stout for three months in casks that have previously held Jameson whiskey, before returning them to Midleton.  Then they are refilled with Jameson and finished for six months.

Jameson is the largest Irish whiskey brand in the world and sells over 30 million bottles each year.  It is currently owned by Irish Distillers Pernod Ricard.  The Midleton distillery was built in 1975 to replace the old Bow Street distillery in Dublin - this is now the brand's visitor centre. This had been founded by John Jameson in 1780 but was no longer able to keep up with the increased consumer demand. The recently expanded Midleton distillery makes both single grain and single pot still whiskeys and the combined capacity is a huge 64 million litres per year.  This goes towards other IDPR brands such as Green Spot, Paddy and Redbreast.

The Franciscan Well brewery was established in 1998 and was one of the first in a new wave of Irish craft beer producers.  It is housed in a converted Franciscan monastery, which dates back to the early 1200s.  The collaboration with Jameson came about following a chance meeting between David Quinn, the Master of Whisky Science at Midleton, and Shane Long, founder and head brewer at Franciscan Well.  Several trials followed and the result is designed to appeal to seasoned whiskey drinkers, craft beer fans and new consumers alike.


Franciscan Well will continue with the continuous production of Caskmates, although other smaller one-off collaborations could happen with local craft brewers around the world.  The Jameson Caskmates whiskey is bottled at 40% ABV and will be available in eight markets around the world including Ireland, South Africa, the UK and the USA. The price will be $30/€39.


Our tasting notes
The colour is a deep golden yellow and the nose has immediate heavy aromas of butterscotch and vanilla.  It smells delicious especially once further aromas of cocoa, cinnamon and milky coffee come through.  Hints of treacle and ginger add further depth.

On the palate, the whiskey feels soft and gentle.  It has a lovely viscous quality that coats the mouth.  The initial notes are of butterscotch, black treacle, vanilla and a pinch of cocoa powder but there are also some wonderfully warming wood spices that compliment them - think of cinnamon, nutmeg and all-spice in particular.  Other notes then begin to develop, especially some malty cereals and dried mango, and these add depth and further structure to the whiskey.  There is a nuttiness also that is most reminiscent of hazelnut praline.  As it progresses towards the finish, the milky coffee element from the nose evolves and is joined by hints of milk chocolate and bitter candied lemon.

The finish is relatively long, sweet and soft.  The warming wood spices come through and balance the sweetness very well towards the end and the mix of butterscotch, coffee and treacle is superb.

What's the verdict?
The collaboration between Midleton and Franciscan Well has produced an excellent whiskey.  The Jameson Caskmates has maintained the soft and gentle character that many consumers enjoy but has added some darker elements that compliment this very well.  It is a very enjoyable drink and one that should open up Jameson and Irish whiskey in general to more drinkers.  When you consider the price and the quality, this whiskey seems difficult to beat.

Now we just need to try the Franciscan Well stout matured in the Jameson casks to complete the experience.  It would be great to taste both products together.

World famous for distinctive flavor and smooth characteristics. Carries hallmark of quality which has made it the best selling Irish whiskey around the world. And after collaboration, They will made excellent whiskys and can't wait to taste.

Just had this for the first time. Your description is spot on. This is a lovely blend that is as much fun as the regular blend.