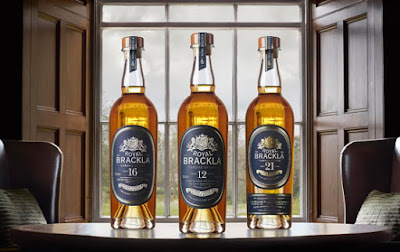 This new range from the Royal Brackla distillery forms part of a larger range called The Last Great Malts.  This showcases whisky from each of the five Scotch distilleries owned by John Dewar & Sons. Ranges from Aberfeldy, Aultmore and Craigellachie are already on the market, both in domestic and travel retail, with Macduff (which will be bottled under the Deveron name) to follow shortly this Autumn. It is the first full range to ever be released from the distillery and one whose whiskies we were very unfamiliar with.

The Royal Brackla distillery is located in the hamlet of Cawdor, close to the Highland town of Nairn.  It was founded in 1812 by Captain William Fraser and became the first Scottish whisky distillery to be awarded a Royal Warrant.  This was given by William IV in 1835.  Numerous whisky brands have been given this honour since, but only two further distilleries - Lochnagar in 1848 and Laphroaig in 1994.  It is currently owned by John Dewar & Sons, which is a subsidiary of Bacardi, and the capacity is four million litres per year.  Most of the whisky produced at Royal Brackla is used in the range of Dewar's blends.

“This was described as The Drink Divine by the Royal household in the 1830s, so we had to take our time and do justice to Royal Brackla’s incredible heritage.”
Stephen Marshall, Global Marketing Manager for The Last Great Malts.


The Royal Brackla range features expressions of 12, 16 and 21 years of age. They are priced at £46, £85 and £175 respectively. All are bottled at 40% and are available now in 10 worldwide markets - Canada, France, Germany, Japan, Russia, Sweden, Taiwan, the UK and the USA, plus Global Travel Retail.

Royal Brackla 12 years old
The colour is pale gold and the nose has aromas of vanilla, golden syrup and sultanas to begin with.  Further aromas of almonds, dried green apple and earthy spices (think of ginger especially) are also present.  On the palate the whisky feels tangy and fresher than expected with some candied lemon and crisp green apples appearing first.  As these notes settle the palate softens and the sultanas, syrup and vanilla from the nose come through.  There are also elements of honeycomb and burnt toffee, plus hints of cocoa, cinnamon and ginger.  The finish is a little short and feels slightly metallic, especially once the sweeter characteristics fade.

Royal Brackla 16 years old
The colour is golden yellow and the nose has a lovely mix of aromas - think of vanilla, toffee/fudge and ripe stone fruits (especially apricot and peach).  Underneath are a series of woody baking spices with cinnamon, mace and all-spice present.  On the palate there is a distinct bitter orange note that hits first and this is followed by some burnt caramel.  Some softness and sweetness are introduced with notes of dark dried fruits (imagine raisins and sultanas), toffee and brown sugar.  The ripe stone fruits are lessened but still present.  Increasing oak and cinnamon spice add depth and take hold during the finish, giving a pleasant dryness.

Royal Brackla 21 years old
The colour is a deep gold and the nose is packed with lovely aromas of raisins, chocolate and brown sugar.  These are complimented by further aromas of dried tropical fruit (especially mango) and a distinct earthy spice (ginger and ginseng), plus hints of cinnamon and liquorice.   This is very soft on the palate with dried fruits (think of raisins, apple and mango) and muscavado sugar prominent.  Extra sweetness is added by notes of caramel and a hint of treacle.  There are also hints of bitter oranges, cinnamon, bittersweet malted cereals, earthy ginger and a whiff of peat.  The finish is slightly short but pleasant, with the earthy, spicy and malty notes hanging around longest.

What's the verdict?
Having never tasted anything from the Royal Brackla distillery before, we were not entirely sure what to expect.  What we discovered are a set of whiskies that have maintained a certain lightness despite their maturation predominantly in ex-sherry casks.  They manage to balance sweetness with spiciness and an interesting fresh tangy quality, which is evident especially in the younger two expressions.  Which is our favourite?  It is difficult to say but the 21 years old definitely feels the most opulent and classy of the three.

eToro is the best forex broker for rookie and advanced traders.