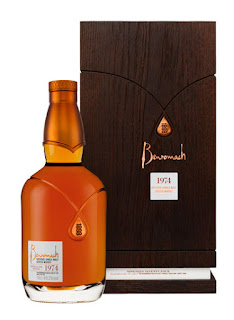 The 1974 Vintage is the latest limited edition old single malt whisky to be released from Benromach, the small independently owned Speyside distillery.  It is the latest in their Vintage series.  The whisky comes from a single ex-sherry butt (Cask #1583) that has yielded just 452 bottles at a cask strength of 49.1% ABV.  The cask is one of the few remaining from before current owners Gordon & MacPhail took control in the 1990s.  The whisky is presented in a hand blown decanter and dark wooden casket, and both are decorated with copper detail.  The 1974 Vintage will cost £1200 each and is available through specialist whisky retailers in selected international markets.

Benromach is located on the outskirts of the town of Forres in the north of the Speyside region.  It was founded in 1898 under the name of Forres Distillery and was one of the last designed by the renowned Victorian distillery architect Charles Doig. The distillery became known as Benromach in 1919, taking the name from the nearby Romach Hills.

The current owners are Gordon & MacPhail, the large independent bottling company, who are based in nearby Elgin. They took control in 1993 and fully renovated the distillery as it had been closed for the previous 10 years.  It was re-opened by Prince Charles in 1998 and the current annual production capacity is just 500,000 litres per year.

"The 1974 Vintage is incredibly rare and is a moment to be treasured as very few casks of Benromach remain from that time."
Keith Cruickshank - Distillery Manager at Benromach.


For further information about this release, other bottlings from Benromach or the distillery - please visit www.benromach.com.

Our tasting notes
The colour is a deep gold and the nose is full of sumptuous aromas - first come sultanas and dried apricot with golden syrup and soft earthy peat smoke, then hints of baking spices (think of cinnamon, star anise and clove especially), candied orange and lemon peel.  Underneath are further aromas of gingerbread, waxy furniture polish, liquorice and dried apple.

On the palate this whisky feels viscous and classy.  There is an instant hit of refined maltiness and golden syrup.  These quickly combine with a heady mix of fresh and dried fruit notes - sultana, raisin, green apple, dried pineapple and caramelised banana.  In addition there is a lovely crumbly muscovado sugar characteristic, plus an array of baking spices as on the nose,  These are led by cinnamon, mace and liquorice root in particular.  There is also a background earthiness that is reminiscent of soft gentle peat smoke and hints of nuttiness (think of walnut and hazelnut especially) and warming ginger.  This creates a delicious battle between the sweet and bittersweet notes that ends up being well balanced.

The finish is long and luxurious.  The sweet and spicy elements combines with the fruity characteristics with the more bittersweet notes (especially the cinnamon-led baking spices, malty cereals and soft peat smoke) becoming more prominent with time.

What's the verdict?
The Benromach 1974 Vintage is a wonderful whisky and one that shows just how good old whiskies can be with sympathetic casking.  A whisky matured for over 40 years in an ex-sherry cask can be heavy, woody and sulphuric and we have experienced some like this.  However, this is extremely well balanced, full of character and very easy to drink.

It obviously costs a lot of money but offers good value in comparison to other recent releases of a similar age which have been pitched at much higher prices by the brand owners.  If we had the money, then this would be one of our whiskies of choice.  We could literally run out of superlatives when describing it. We thank Benromach for sending us this sample for us to try.

Professional trading signals delivered to your cell phone every day.

eToro is the best forex broker for beginning and professional traders.