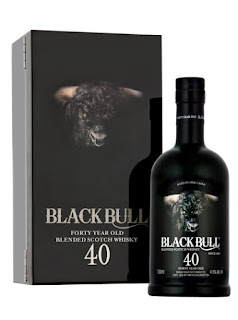 Black Bull is an award-winning super-premium blended whisky from the independent bottler of Duncan Taylor.  This 40 years old expression, which is bottled in small batches and was first released in 2010, has yielded just 1,500 bottles.  It contains a high single malt content of 84% for a blended whisky and some of the rare single malts included are Aberlour 1975, Glenlivet 1968 and Macallan 1967. The oldest whisky in the blend was distilled in 1966.  The Black Bull brand has been around for over 75 years since it was originally produced in the early 1930s, with Duncan Taylor taking it over in 2001.

Duncan Taylor was set up as a whisky brokering business in Glasgow in 1938.  Their plan was to bottle and blend whisky for export to America following the Prohibition period. They are now based in the town of Huntly, close to the Speyside whisky region of Scotland, and are reported to have one of the largest privately held collections of rare whisky casks in the world.  They bottle approximately 200 different whiskies a year and their range is extensive with numerous branches to it.

For more information on Duncan Taylor, their whisky and the different ranges, please visit www.duncantaylor.com.

This batch of the Black Bull 40 years old has been bottled at 47.6% ABV and will be available in selected specialist whisky retailers across the globe. The recommended retail price will be £750 a bottle.

Our tasting notes
The colour is a deep golden yellow with a hint of amber and the nose is sweet and spicy.  There are initial aromas of butterscotch, golden syrup, dried peaches and a lot of baking spice (imagine a mix of cinnamon, clove, nutmeg and a hint of star anise).  Underneath are further aromas of raisins, sultanas, dried pineapple, gingerbread and malted cereals.

On the palate this whisky feels velvety and initially very fruity (think of the dried peaches and pineapples again, along with some dried mango and green apple).  There is a distinct earthiness, which borders on soft peat smoke and was not evident on the nose.  The palate has a lighter than expected feel and a lovely sweetness.  Notes of vanilla fudge, honeycomb and butterscotch add to the early fruitiness and are joined by an increasing oaky and spicy note.  This has elements of the baking spice from before, particularly the cinnamon and clove, along with beeswax furniture polish and wood shavings.  A hint of something floral, most reminiscent of honeysuckle, rounds off everything.

The finish is on the short side.  It seems to fall away especially once the sweetness and woody spices begin to fade.  The lovely butterscotch and dried tropical fruit notes linger but then they are also gone.

What's the verdict?
This batch of the Black Bull 40 years old is very nice, soft and easy drinking.  It has a delicious mix of characteristics and shows how good old whiskies can be.  The nose in particular is stunning and extremely inviting.  The palate is delicious also but the finish is a little short and effects the balance a bit in our opinion.  This is an expensive whisky and one of good quality.  To us it is one for drinking rather than collecting or investing