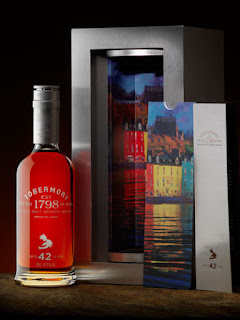 This new whisky is one of the oldest ever single malt expressions from the island distillery of Tobermory.  The Tobermory 42 years old will be available exclusively through the travel retail sector around the world and there are just 650 bottles. These come presented in a bespoke 'rotating' box and an exclusive painting of the waterfront of Tobermory, the capital of Mull, by renowned local artist Angus Stewart. Older versions of Tobermory are extremely rare as the distillery was closed for much of the late 1970s, 80s and early 90s.  This bottling reportedly contains some of the first whisky distilled after Tobermory was reopened in 1972 and has been matured ex-sherry casks.

Tobermory is located in the town of the same name on the island of Mull, the UK's 4th largest island, that lies just off the west Highland coast of Scotland. It is the only distillery on Mull and was founded in 1798 by John Sinclair. The original name was Ledaig (pronounced 'lay-chegk' and meaning 'safe harbour' in Gaelic) and was only changed to Tobermory in 1979 when new owners rescued the ailing distillery. It is currently owned by Burn Stewart Distillers, which is part of the larger South African-owned Distell Group Ltd who took control in 2013. The current production capacity is one million litres per year.

The Tobermory 42 years old has been bottled at a cask strength of 48.1% ABV and is non chill-filtered and of natural colour. The recommended retail price is £2,500.

Our tasting notes
The colour is a deep amber and the nose is rich and expressive.  There are lots of initial dark dried fruit fruit aromas, along with burnt caramel and earthy spices (think of ginger especially).  Underneath is a hint of sulphur (imagine struck matches), heavy wood spices, waxy furniture polish, spent coffee grounds and dark chocolate.

On the palate this is a firm and gripping whisky that holds on to the taste buds.  This is particularly true of the savoury notes, of which there are a number - think of burnt caramel, espresso coffee, bitter cherries, dark chocolate, heavy wood spices (think of cinnamon, clove and liquorice in particular) and some soft background peat smoke.  The wood spices have a tannic quality that makes it feel increasingly dry.  Some much needed sweetness comes in the form of butterscotch, nougat and dark dried fruit notes (imagine raisins and candied orange peel).  There are also hints of dried tropical fruit (mango especially), tobacco, ginger, hazelnut, ginseng and brine.

The finish is very woody and quickly becomes dry as a result.  The fruitiness and sweetness seem to fade rapidly to leave the spices, soft earthy peat smoke and tannins to fight it out.  The result is feels slightly overpowering.

What's the verdict?
Even though we have been blogging and writing about whisky for over eight years we do not often get to taste such a whisky very often.  It feels like a real treat, especially when we think that it was distilled before both of us at Whisky For Everyone were born.

The nose is full of enticing aromas and the palate is complex with plenty of depth, although possibly a little too savoury for our liking.  But that what old whisky can be like.  It is not surprising as it has spent so long in the cask.  The finish is particularly drying.

I visited and sampled at many distilleries on my recent trip to the Highlands. During which, I was lucky enough to try the toberymory 42 yr old.
It would rate in my top 3 Malts of all time, but that's my opinion. I can't understand the reviews of some of the so called experts who give toberymory bad press. I think they should look at each whisky on its own merits and not distinguish by distillery. Toberymory make some excellent and not so excellent malts, but Toberymory 42 yr old is off the scale!