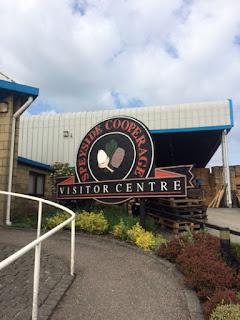 The Speyside Cooperage is located on the outskirts of Craigellachie, just off the main road between the village and Dufftown in the heart of Speyside.  It is the largest independent cooperage in the UK and the only one with a visitor centre.  This won a prestigious Icons of Whisky award in 2011 for Visitor Attraction of the Year and includes a gift shop, cafe and small cinema.  Many times we have sped passed and contemplated a visit, but on a recent press trip there were finally a couple of hours free to pop in.

The Speyside Cooperage has been manufacturing and repairing casks for the whisky industry for nearly 70 years.  It was founded in 1947 by the Taylor family and remained in the centre of Craigellachie until 1991.  Having outgrown that site the cooperage moved to its current location.  The visitor centre opened a year later in 1992.  The Speyside Cooperage has expanded to include further sites in Alloa, Scotland and in Kentucky and Ohio in the USA.  It is currently owned by French company Tonnellerie François Frère, who took control in 2008.


The tour begins with a short film about the cooperage and includes the story of the journey the wood takes from acorn to cask.  Following this, we moved to a viewing gallery upstairs from where we could watch the various stages of the life cycle of a cask and the traditional methods, skills and tools used by the coopers.  It was fascinating the see the skill and speed with which the craftsmen work and sample the sounds, sights and smells within the cooperage.  There are also old photographs and other memorabilia from the cooperage archives on display.


Interesting facts conveyed by our guide included that there are around 50 different species of oak growing around the world, oak is used for whisky casks as the wood has the correct structure to breathe but not leak and that the average age of a whisky cask is approximately 60 years.  During this time it may visit the cooperage three or four times for re-conditioning.  The Speyside Cooperage produces or repairs a staggering 150,000 oak casks every year.


The Speyside Cooperage is open on Monday to Friday from 9am to 5pm, although the cafe and gift shops close slightly earlier.  There are two tours on offer - the Classic Tour for £3.50 per person and the VIP Tour for £15 each, which gives a 'behind the scenes' look at the cooperage with a former cooper as your guide.  More details can be found at www.speysidecooperage.co.uk.

We would love to return at some point and do the more in-depth VIP Tour as the regular tour really whet the appetite to learn more.  It is a fascinating and vital facility for the Scottish whisky industry and well worth a visit if you are in the area.

Have you visited the Speyside Cooperage?  What did you think?  Leave us a comment below or on social media.