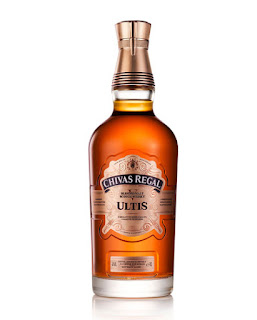 Chivas Regal Ultis is the first ever blended malt, a whisky made solely from single malts, to be released by the renowned premium brand.  It has been crafted using five rare single malts from within the Chivas Brothers portfolio of Speyside whiskies - Allt A'Bhainne, Braeval, Longmorn, Strathisla and Tormore.  The use of five malts reflect the fact that Chivas Regal has only ever had five Master Blenders since it was first released in 1909, with Ultis being created by the current Chivas Brothers blending team. The name is a combination of two words - 'Ultimate' and 'Fortis' (meaning 'strength' in Latin).

Chivas Regal is produced by Chivas Brothers, a company set up by James and John Chivas in the early 1800s. They owned a luxury grocery store in Aberdeen that imported products such as brandy, rum, port, spices, tea and coffee. As was the trend at the time, they began blending their own whiskies and Chivas Brothers' whiskies became so popular in late Victorian times that Queen Victoria issued them with a Royal Warrant.

Chivas Brothers and the Chivas Regal brand is currently owned by drinks company Pernod Ricard, who purchased it in 2001, and they have helped to grow the stature and sales of the whisky around the world to the point that is is now one of the leading Scotch whisky brands.

“I am honoured to have been one of only five Master Blenders for Chivas Regal, and I believe that the Ultis represents the true essence of this iconic Scotch whisky brand.”
Colin Scott - Chivas Regal Custodian Master Blender.


The Chivas Regal Ultis will be available to both domestic and travel retail markets globally and will have a recommended retail price of $200 US (£159).

Our tasting notes
The colour is deep golden yellow with a hint of amber and the nose has initial aromas of fruit (especially red apple and peach) and sweetness (think of fudge and toffee).  Underneath come further aromas of honey, caramelised pear and cinnamon.  Late hints of candied citrus (orange and grapefruit) add to the fragrance.

On the palate the whisky is incredibly soft, velvety and creamy.  There are plenty of caramel and toffee notes initially, followed by an increasing note of vanilla (this is the pods rather than an essence).  Then comes a blast of fruit - this is a mix of dried tropicals that are most reminiscent of peach and mango, plus some stewed apple and pear.  Further background notes of bittersweet cereals and delicate warming spices (cinnamon, ginger and a hint of clove) add depth, structure and complexity.  Hints of milk chocolate and candied orange round things off.

The finish is of decent length and is predominantly sweet.  The fruitiness fades to leave the sugary toffee and caramel notes to the fore.  As these fade some late wood spice come through, as does the bittersweet malty cereal characteristics.

What's the verdict?
This is a delicious new expression of Chivas Regal.  It takes the brand in a different direction as it is a blended malt rather than a traditional blend, but not really in a stylistic sense.  This comes from the fact that with Ultis they have used five of the core single malts used to construct many of the other variants of Chivas Regal.  Ultis has a luxurious feel to it and the packaging (and price tag) backs this up, as do the associated bar accessories and glassware that were present at the launch event.

I have bookmarked your blog, the articles are way better than other similar blogs.. thanks for a great blog!
whiskey bottles